Along the way the pint-sized German star has put in some incredible displays on the bike, more than once bridging solo to the lead pack and then staying there on the run. Recently she started her 2013 season exactly where she left off, blowing away a strong field in Mooloolaba for her first ITU World Cup win. We caught up with her afterwards to ask a few quickfire questions. Tell us about your first ever triathlon…
“My first ever triathlon it was in Germany, an age-group race and I was swimming so badly. I was 20 and I didn’t learn swimming until I was 19 so I was not expecting much, but I finished on the podium so I was so happy that I stayed in the sport and then at the age of 25 I thought, let’s try see how far you can go with it. Now I’m world number two, it’s amazing.”

What has been your favourite ITU race so far?
“There is so many nice places, but I really like the challenging races like in Madrid and in Auckland, the hilly courses where it is really tough and I’m really looking forward too Kitzbühel , I think it will be an amazing race. I think you have to be a complete triathlete, not only a swimmer and a runner girl, but you have to bike really hard and I love these challenges and I’m really looking forward to Kitzbühel.”

What’s your favourite training drill?
“I really love the combined training, do a really hard bike session and then a run off, I really like that.”

What’s your least liked training drill?
“Swimming, the 100s in the swim, I really don’t like that because I am so bad at tumble turns and it’s always frustrating to swim with the really good girls. I love the open water stuff but not the pool swimming.”

What’s the number one tip you would pass on to age-group triathletes?
“Pace yourself really well, don’t go too hard, be smart and take smart decisions - save a little bit of energy for the sprint finish.”

To find out more about Anne Haug, please click here to view her profile. 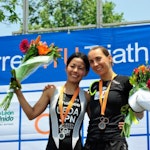 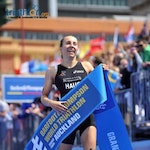 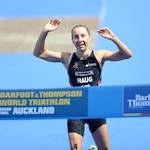 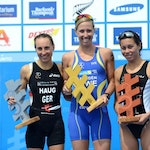 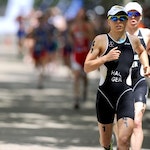 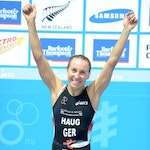