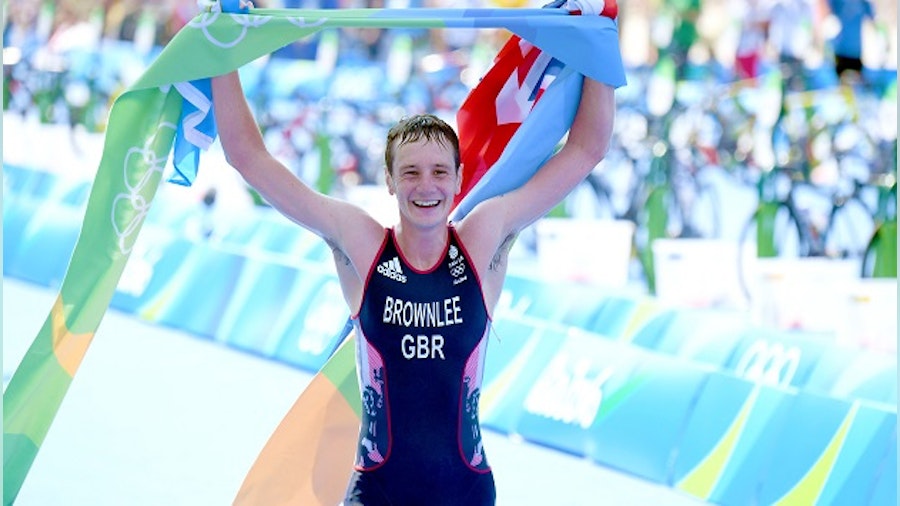 Great Britain’s Alistair Brownlee has become the first triathlete to successfully defend his Olympic title, with a crushing performance across all three legs leading him to Gold in the Olympic triathlon event in Rio on Thursday. Sweetening the pot, Alistair shared the podium with younger brother Jonathan Brownlee, who crossed over next for silver. Surprising even himself, Henri Schoeman (RSA) scooped up the final medal in bronze position.

Back to his best form at Copacabana beach, Brownlee was in the lead from almost the very start to the very end - pulling away from younger brother Jonathan Brownlee before the halfway mark of the run, to eventually win in a time of 1 hour 45 minutes and 1 second. His result means he claims a rare place in triathlon history, not only as the first athlete to win two Gold medals in the triathlon event, but the first to do so at successive Olympic Games.

“We want to enjoy what we were able to pull off today and the last three months of training that went so well and that we managed to get the race to go our way,” said Alistair.

“Obviously it is very special, but the important thing is that I turned up today. I have trained as hard as I can this year and executed on the day. The records, and being able to retain it, isn’t the big thing for me. It is turning up on this day and winning the race. I did that. Maybe the enormity of it will sink in over the next few weeks or so, I don’t know, but I am pleased to turn up and that Jonny did as well.”

Jonathan Brownlee claimed the silver to make it a banner day for British triathlon and the Brownlee family, adding to his bronze medal in London. Behind the Brownlees, it was South Africa’s Henri Schoeman who was having the race of his life to claim South Africa’s - and Africa’s - very first medal in triathlon. It was the first major podium place in Schoeman’s career, having not made a podium in the World Triathlon Series. Just behind him was teammate Richard Murray (RSA), recording the fastest run split of the day to finish fourth. It was the first time ever that South Africa had placed two men in the top 10 of an Olympic event.

While previous Olympic races had shown anything could happen in the race, this one was much more clear cut from the start. The Brownlee brothers sat just behind the leaders in the swim, then set a race-defining pace in the first half of the 40km bike leg. Driving up the tough hill on the Rio course, they were part of a lead group of 10 that rode the first 20km more than 90seconds faster than the fastest athlete on the bike course in last year’s test event. It saw them double their gap on the chase group over the first two laps, stretch it to a minute on the third, and then keep it around 75 seconds for the rest of the bike.

Even though they had established a clean break on the field, the Brownlees’ didn’t let up on the run. While France’s Vincent Luis initially kept up in the first lap, they broke before it ended and were never headed. Alistair then decided to pull away from Jonathan with plenty of time to go, but slowed down at the finish line to celebrate, leaving the winning margin at just six seconds. The Brownlee brothers join Canada’s Simon Whitfield and New Zealand’s Bevan Docherty as the only men to have won multiple Olympic medals.

Earlier the race commenced with a beach start for the first time in the history of triathlon at the Olympic Games. The initial stretch out to the first marker saw three distinct groups form, before Slovakia’s Richard Varga took his place at the front of the swim at the first marker and the field came together. With Russia’s Igor Polyanksiy and Italy’s Alessandro Fabian just behind him, he started to push the pace and string out the rest of the field in his wake.

Just in the slipstream behind those three sat a perfectly positioned Alistair Brownlee, Jonathan Brownlee and Henri Schoeman, setting the tone for the rest of the day.

After the leaders passed the final marker and headed into shore Varga extended his pace even further, and he hit the beach in a time of 17 minutes and 18 seconds, the fastest recorded for a non-wetsuit swim in in an Olympic event. It was a full 30 seconds faster than this swim in the test event in 2015.

As expected, the Brownlees then ratcheted up the speed on the first bike lap, in the process narrowing the lead group to 10, Jonathan Brownlee (GBR), Alistair Brownlee (GBR), Henri Schoeman (RSA), Aaron Royle (AUS), Martin van Riel (BEL), Vincent Luis (FRA), Andrea Salvisberg (SUI), Ben Kanute (USA), Richard Varga (SVK) and Alessandro Fabian (ITA). The lead group’s strategy in the first lap was clear, start to burn away the rest of the field. With most of the group rotating turns at the start, they rocketed up Rio’s tough hill. And that approach paid dividends immediately.

Spain’s Mario Mola was just 19 seconds down after the swim, but his chase group of about 15 finished the second lap 41 seconds behind the leaders. Despite the best efforts of the chase, they couldn’t stop the quickly escalating gap from rising further. After the third lap, the time difference was a minute. However, that did also allow the first and second chase groups to come together, and with it pull South Africa’s Richard Murray back up to the first chase, and he set himself to work on the front of that group. Along with David Uccellari (ITA), Ryan Bailie (AUS), Kristian Blummenfelt (NOR), Tyler Mislawchuk (CAN) and Andreas Schilling (SUI), they managed to at least stem the time flow over the rest of the 40km.

But the frenetic pace set by the leaders in those first four laps meant it was hard to make up any ground. At the halfway mark of the 40km bike leg, Jonathan Brownlee had a split that was just over 90 seconds faster than the split set by the fastest man in last year’s test event. While the chase kept the gap fairly steady after halfway, it meant they still hit T2 a full 1 minute and 14 seconds behind the leaders.

“At the start of the race I felt really good,” Jonathan said. “My training has gone really well, probably a little bit better than Alistair, but maybe the shorter distance suits me a little bit more. During the race I felt really good, I had a good swim start, a good swim and then on the bike I felt great. We were pushing for the first couple of laps, but I felt very controlled, I might have put in a little too much work at times during the bike, but it got to me and Alistair was a little bit stronger than me. It was a hard race.”

With the medals surely secure in the lead group the Brownlees wasted no time heading to the front. But it was France’s Vincent Luis who went with them. That trio quickly put a gap between them and the rest of the group, which was led by Schoeman, followed by Van Riel and Royle.

But they hadn’t even finished the first lap before the Brownlees made their killer move. Just ahead of entering transition to start the second run lap, they flew off the front, and Luis simply couldn’t go with them. Behind him, Schoeman was catching and shortly overtook the Frenchman. The South African settled into third spot early on in the run and didn’t let up, leading to a historic medal. His teammate Murray was flying behind, along with Portugal’s Joao Pereira - who finished fifth.

Belgium’s Martin van Riel finished sixth, the first time a man from Belgium had finished in the top 10 in an Olympic race.  Luis’ seventh place continues a strong run for France in the Olympic race. It means they have had top-10 finishers in all editions of the men’s triathlon at the Games.

Spain’s Mario Mola also recorded an impressive run split to finish eighth. He was followed in by Australia’s Aaron Royle and Ryan Bailie, their places meant it was the first time two Australian men had finished in the top 10.