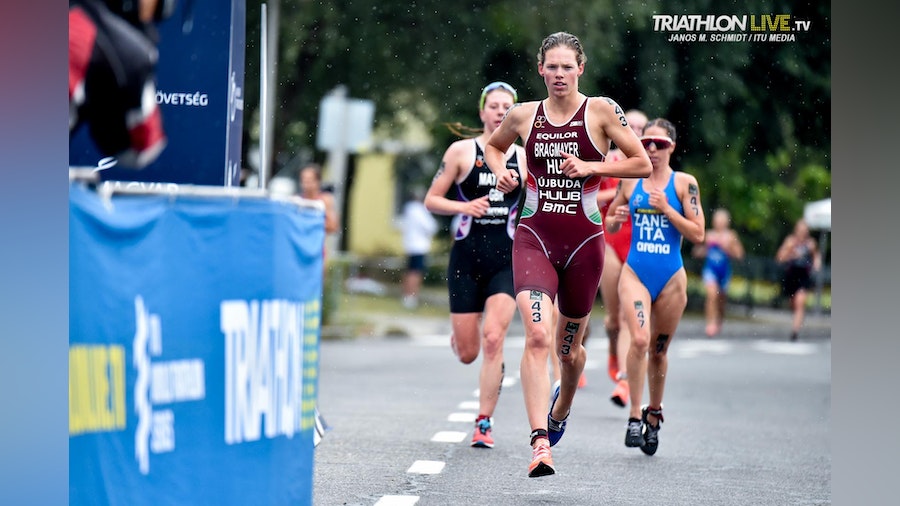 More than 150 athletes from 40 nations competed across five semi-finals on Saturday, despite day one of the Tiszaujvaros World Cup having proceedings hampered by adverse weather that forced the format to be switched to a super-sprint.

That did little to dampen the spirits of home favourites Zsanett Bragmayer, Dorka Putnocki and Zsofia Kovacs, all qualified from the women’s races before Gabor Faldum, Tamas Toth, Mark Devay and Csongor and Bence Lehmann ensured five Hungarians will compete on Sunday afternoon.

For the first time in their 23-year history, Tiszy World Cup finals will be shown in full on TriathlonLIVE.tv from 14:45CET on Sunday. The full start lists are here.

Women’s Semi-Final 1
Race number one Natalie van Coevorden put in three solid segments to become the first Elite of the day to qualify, quickly followed by fellow Australian Kelly Ann Perkins. Perkins had led from the early stages of the swim and the field strung out quickly, all but guaranteeing the duo, along with Emma Jeffcoat and Tamsyn Moana-Veale, their final berth, even with an awkward T2 for the top-ranked Aussie.

Sophie Alden (GBR) looked well-placed out of the water but fell back on the wet bike course, and it was a desperate push to the line to cross in 14th and narrowly guarantee qualification along with teammate Sian Rainsley.

No such problems for Erika Ackerlund (USA) and Sara Vilic (AUT), the Austrian flying through the 3.2km run, Miriam Casillas (ESP) and Beatrice Mallozzi (ITA) also among those through to the final. Despite finishing 15th and 16th respectively, Brittany Dutton (AUS) and Poland’s Maria Czesnik are also through after posting faster times than Amber Schlebusch (RSA) in SF2.

Women’s Semi-Final 2
Tenth-placed last year, Hungary’s Bragmayer crossed first in the second semi, heading onto the bike in check with leaders Putnoczki and Jolien Vermeylen (BEL) and delivering the fastest run of the group to finish ahead of Italy’s Ilaria Zane.

Estonia’s Kaidi Kivioja reached the final by the tightest of margins after enduring a testing race that saw her struggle in the water and then come off her bike, only to dig in and grab the last qualification spot along with Spain’s Anna Godoy Contreras.

Germany’s Annabel Knoll and GB’s Olivia Mathias will be happy with their performances as they managed their race execution with skill, Mathias and Anne Holm (DEN) putting in the work on the bikes to set themselves well for a controlled final run segment.

Men’s Semi-Final 1
Ilya Prasolov never looked less than in complete control of the first men’s semi, which was also the fastest of the three on Saturday afternoon. The Russian was with Stefan Zachaus (LUX), Gaspar Riveros (CHI) and pre-race number one Eli Hemming (USA) at the line, Bence Lehmann ten seconds back and Aurelian Raphael, who had led for much of the super sprint, grabbing the last automatic qualifying spot.

After a strong showing in Chengdu and at this year’s Mixed Relays as part of Team Canada, Alexis Lepage once again looked like he was enjoying the short, sharp approach of super sprint racing, coming home sixth ahead of Gregory Barnaby (ITA) and Ricardo Batista (POR).

Men’s Semi-Final 2
Spain’s Genis Grau was the fastest man in SF2, coming out at the head of a dash for the line and, ultimately, the final. Eleven men were locked into a sprint finish with 250m to go after several athletes had succumbed to the wet conditions on the bike.

Second recently in Antwerp, Sweden’s Gabriel Sandor recovered from one of those incidents to catch up with the lead group and eventually ensure his qualification ahead of a former champion here, Dmitry Polyanskiy, who delivered another assured performance. Chile’s Felipe Barraza and Bob Haller (LUX) narrowly managed to avoid trouble on the bike and will also compete on Sunday.

Men’s Semi-Final 3
The day’s final super-sprint semi saw Wian Sullwald (RSA) motor into the Sunday start list after another imperious run took him home five seconds ahead of Ryan Fisher (AUS). Another debut World Cup medallist from last month’s race in Belgium, Diego Moya (CHI) made it through along with Gregor Payet (LUX), but for Italy’s Delian Stateff, 10th place wasn’t fast enough to see him through.

The British duo of Barclay Izzard and Gordon Benson worked well together to guarantee themselves a shot at the podium on Sunday, Emil Holm of Denmark also putting together a solid race to put him in with a chance of a debut World Cup medal.

For the full results from Saturday’s semi-finals, click here 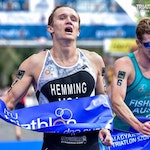 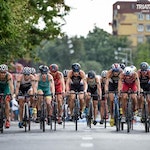 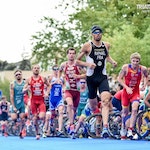 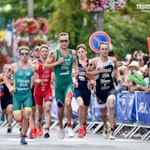 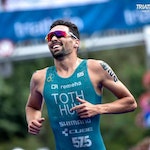 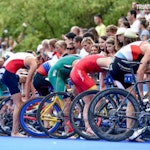 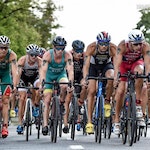 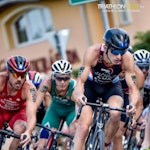 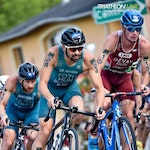 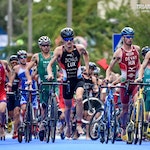 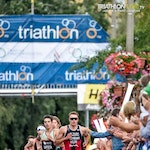 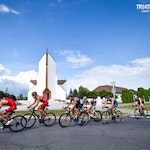