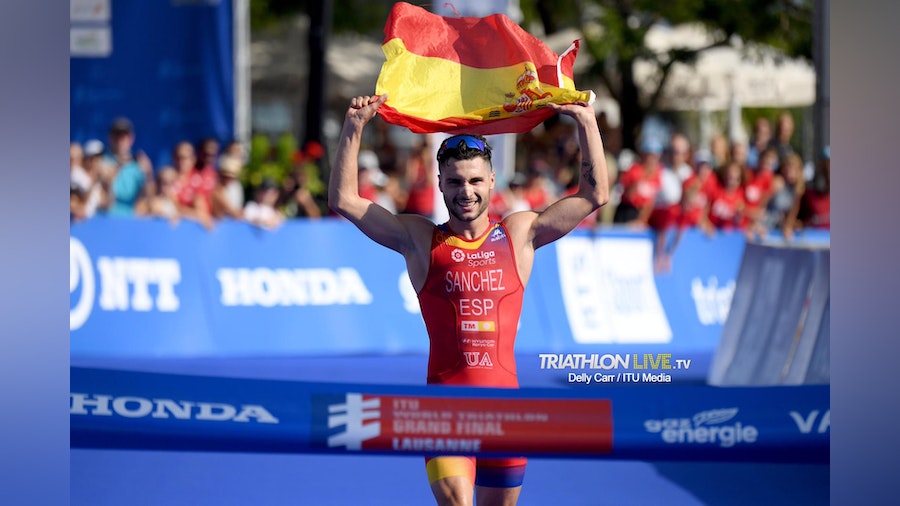 Spain’s latest triathlon sensation Roberto Sanchez applied the early pressure over a taxing 10km run to wrap up the 2019 U23 World Championships in Lausanne thanks to an imperious performance that left the strong field trailing in his wake.

A huge pack of athletes had flooded T2 together, almost all the pre-race favourites in contention, but it was the Spaniard who took proceedings by the throat, flying through the hilly final segment in little more than 32 minutes for the gold.

Behind him, last year’s Junior World Champion Csongor Lehmann clearly enjoyed his first Grand Final among the U23s, pulling away from Ran Sagiv of Israel to collect the silver and bronze respectively.

“I feel incredible,” said a thrilled Sanchez. “It was the perfect race for me. I was in the second group at the beginning of the bike course but we managed to work together and chase down the leaders. In the first lap of the run I gave it all and managed to open a 20-second gap, and then it was just a matter of maintaining it. This is the World Championships and I knew that there were really good runners in the field, I’m so happy with how the race went.

The men took to the pontoon on Lake Geneva with gold in their sights, but it was Australia’s Matthew Hauser who set the early pace in the water, leading the field round the first buoy, congestion behind as the likes of Seth Rider (USA) and Tayler Reid (NZL) sought a clear line.

Chile’s Diego Moya put together another assured swim, Hungary’s Lehmann brothers Bence and Csongor also well set as they came to the end of the 1.5km.

It was Reid and Rider first into transition, Hauser first to put the hammer down on the bike, crowd favourite Fabian Meeusen sticking close over the opening stages and attacking the first climb.

What had been a strung-out field soon came together behind them, Brazil’s Kaue Willy and Simon Westermann (SUI) among those to merge into a 26-deep pack. Ran Sagiv was working hard to try and get his small group and Sanchez in touch, and as the lead group grew, it also stretched further away, 60 seconds the lead over chasers like Ben Dijkstra (GBR) and Charles Paquet after five laps of eight, the Canadian having fallen and remounted.

New Zealand’s Kyle Smith and Portugal’s Vasco Vilaca were doing the lion’s share of the work out front for the leaders and at the bell, Anton Ponomarev (RUS) was also looking fresh enough to find a big finish.

That effort had left little in the legs of Smith, and by the time they were out of transition for the second time, it was Sanchez who felt he could play his hand first, searing away from the masses to put in a first lap of four 20 seconds faster than his closest rival.

Csongor Lehmann was also starting to mount his challenge, leaving Brandon Copeland (AUS) Vilala and Moya to duke it out for fourth. Then the Hungarian dropped Sagiv, and while the race by then was nobody but the majestic Mantecon, the emotion on the face of Lehmann said it all, Sagiv equally thrilled with his place on the Grand Final podium.

“That was a really big step up,” admitted Lehmann. “It was much much harder than last year because of the distance and this course was pretty hard. That hill is just, I am speechless. It’s unbelievable to be on the podium again, I did not expect it. This medal is for both me and my brother - we do everything together. We can’t always do our best on the same day but this medal is for the both of us.”

“I really can’t believe it,” said Sagiv afterwards. “It was such a demanding course, a demanding race. I feel so grateful to my family and my coach, I am honoured every day and every weekend to race for this flag and country.”