“It’s a perfect day for the Swiss team,” Riederer said. “Winning a world title at home is incredible. The support from the crowd made a big difference for all of us.”

Competitors raced on four-person teams, with two men and two women representing each country, racing in the order of female-male-female-male. Each of the four athletes completed a 275-metre swim, 6K bike and 1.5K run, before tagging a team member to begin the next leg.

Twenty teams representing 17 countries dove into beautiful Lake Geneva to kick off the second-ever ITU Team World Champs. Australia, New Zealand and Switzerland each fielded two teams. After the first swim a group of six women took the lead onto the bike, including Ryf and Sweden’s Lisa Norden, who won the ITU Sprint World Championship yesterday. Ryf took control of the race on the first 1.5K run segment, giving teammate Wild a 10-second advantage on the chasers.

It’s a perfect day for the Swiss team. Winning a world title at home is incredible. The support from the crowd made a big difference for all of us.

“I was so nervous before the race today,” Ryf said. “I knew I had such a strong team behind me and I just wanted to give them a good start. I started the run so hard and I was really hurting after 400 metres, but I kept pushing because I wanted to give my team the best chance possible to win today.”

The teams from Sweden, France, New Zealand, Switzerland and Australia all started the second bike segment together, with France’s Belaubre leading the charge. After the quick, 6K ride around the Ouchy district of Lausanne, Belaubre charged out of transition with a small gap on the field. By the time Belaubre tagged Peon to start leg three, France had a 15-second advantage on the teams from Switzerland and New Zealand.

“It was tough to keep pace with Frederic on the run, but in a race like this you have to push as hard as you can because you’re also fighting for teammates,” Wild said.

Leg three was all about Spirig, who trailed New Zealand’s Nicky Samuels and France’s Peon after the swim, but easily caught the lead pair on the bike. Spirig wasn’t content just catching the leaders, however, as she immediately pulled away from the other two girls and built 20-second gap by the time she started her run. She held her advantage throughout the short run along the Lake Geneva Waterfront, handing Riederer a 25-second advantage at the start of the anchor leg.

“I had to do everything I could on the bike,” Spirig said. “I really wanted to give Sven a head start. The bike was hard, the run was even harder, but having the crowd on my side really helped me push through the pain.”

I had to do everything I could on the bike. I really wanted to give Sven a head start. The bike was hard, the run was even harder, but having the crowd on my side really helped me push through the pain.
Nicola Spirig

Riederer held the advantage through the swim and then opened up a huge gap on the bike, building a lead of almost a minute on the French and Kiwi teams by the time he hit the run course. The huge gap allowed Riederer to slow down and enjoy the finishing chute, high-fiving the Swiss fans as his teammates waited to greet him at the finish. Riederer broke the tape in 1:13:31, securing the second-consecutive ITU Team World Title for Switzerland.

Hauss finished the anchor leg for France 40 seconds back of Riederer, with the Kiwi team of Kate McIlroy, Tony Dodds, Nicky Samuels and Ryan Sissons rounding out the podium, finishing 10 seconds back of the French. 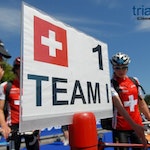 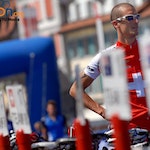 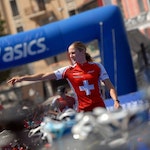 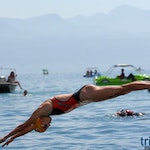 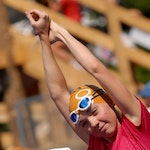 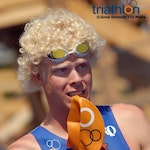 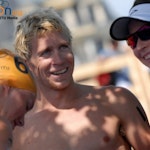 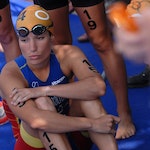 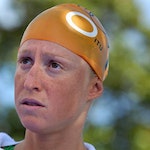 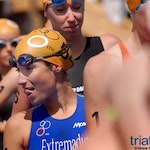 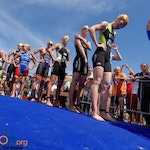