The talk from Tokyo: With Olympic medallists and athletes - women's race 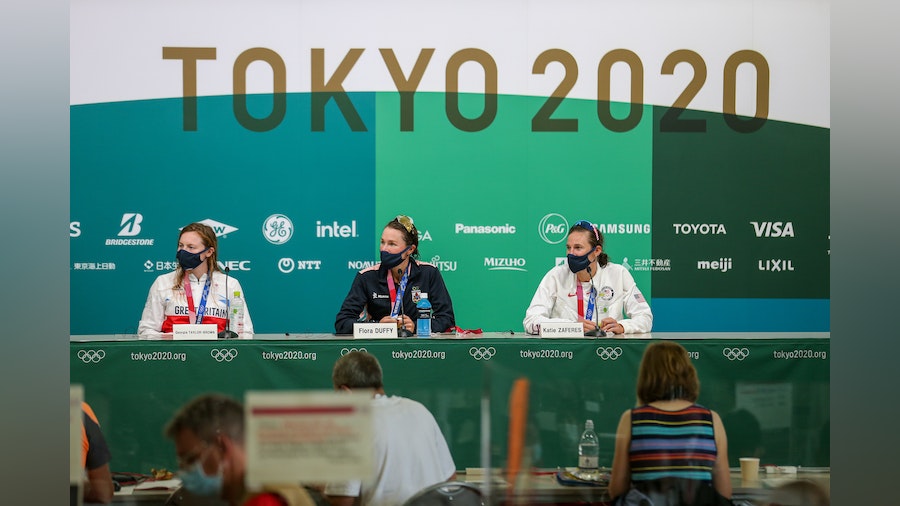 Reactions and reflections with the Olympic medallists and athletes after the dramatic Tokyo 2020 Olympic Triathlon individual women’s competition on Tuesday morning at Odaiba Bay, Tokyo.

Flora Duffy BER – Olympic gold medallist
“Over the last few years I have had quite a collection of injuries and actually when we were here (in Tokyo) for the Test Event in 2019 that had been my first race in an over a year. I had to take a year out because I had a really bad foot injury so racing here in 2019 was my first step in progressing to what I thought would have been the 2020 Olympic Games, in 2020, so I got an extra bonus year which I do think, in a way, did help me. Although this year hasn’t been the smoothest, but I guess that is part of being a professional athlete, you have to deal with injuries and luckily, I have been racing and training for so long now that I have got a lot of miles banked. I think I was one of the oldest in the race. I really had to rely on that.”

“Coming down the finishing chute maybe I did replay a little bit all that it took to get here, I mean it takes everyone a lot here, to win an Olympic medal, it’s not just me, it made it extra special. I had to really dig to get myself back to this form, to this level so I could execute a race like today, because that’s what you need to do. The women’s triathlon and standard is so high now, that you have to bring you’re A-game and execute you perfect race if you want to win.”

“It’s strange to come into an Olympic Games now having raced since last September, I kept it all a bit private what was going on. I got a stress response in my femur, 12 weeks ago, so that was a bit of a shock. My training had gone so well before that though, so I know I had that in the bag. I wanted to keep it private. You don’t want to show your competitors your weaknesses, so I did just say I was ill. I have had 6 weeks of building my running back up again, it’s not perfect, it’s not what I wanted, it’s not what anyone would want but I think I got myself into a really good position. I was as fit as I could have been on that start line today with the circumstances I faced.

“About a week before we flew out, I had to prove that I was fit to compete which was probably more stressful than today because it could have been taken away from me. I proved that I was fit, I was ready to go. I did more than they asked me to do so I had to go into today relaxed, knowing that I had done all I could possibly do to leave it all out there today.”

“We have a great new swim coach that we’ve just taken on at British Triathlon and he got me in the front pack today and I owe a lot to him because that made the race for me.”

“Without the injury I think I could have hung in there and maybe given it a bit more of a race but I think I’ve handled it very well and I am proud of myself to get on that start line.”

“My dad was a runner, my mum was a swimmer, we were just given the opportunity to try every different sport. They were not pushy in the slightest. If we enjoyed something we carried on, if we didn’t we stopped. I have 3 sisters and they quit sport quite young. I obviously did enjoy it, I just had all the opportunity there for me and they let me do what I wanted to do. I have grown up in a sporty family, it was always meant to be.”

“It’s amazing. We’ve got Vicky here, who is one of the medallists from Rio and four-time Olympian and she has given us so much knowledge leading into this, so many tips and tricks. It’s amazing. And Jess, she’s just my rock. She calms me down and tells me everything is going to be ok and puts a smile on my face. We are always going to help each other out, no matter what.”

“It feels good to comeback and get this done, it’s just a relief to be honest.”

Katie Zaferes USA – Olympic bronze medallist
“I am so happy that I was here, it came down to discretion whether I was going to be selected and I was confident that given 6 more weeks of really hard training I could get myself up into a good spot. My dad had passed away in April so that was a really hard time and I had two very rough races. To have the confidence that I would be ready for today and to be able to execute that and actually be ready and be on the podium, I am so proud and so happy that I was even given the opportunity to be here.”

Nicola Spirig SUI – five-time Olympian | Olympian champion and medallist, 6th place at Tokyo 2020 Olympic Games
“Competing at my fifth Olympic Games was a great honour for me! It was a tough day, the race constellation was not what I wished for. So I rode very hard to catch the first pack but the girls in front did a great job and the time difference stayed almost the same. I gave everything on the run and got sixth, a result I am happy with because I did my best today. Well done to the three very strong new medal winners.”

Alice Betto (ITA)
“I haven’t actually realised it yet. I didn’t think I could catch up so much with the girls in front. I thought I was going to end up in the second bunch of athletes, not in the first”, she said. “My swim isn’t yet strong enough to place myself in the first group. I am working on it, so it will be for the next time. I have done something that I would have never imagined I was able to do, that’s with my run. I didn’t know I could close the one-minute margin the athletes in the front had with me. I was like in a trance. I’m realising it just now, so I’m super happy.”

Maya Kingma (NED)
“My swim was actually terrible, I think my start position was good but I was too slow. I missed the real strength, the real power to get away, then I got cramps and something in my shoulder. Normally if this happens I’m strong enough to close the gap or whatever, and I did close some gaps, but it just wasn’t enough to reach the front pack”, she explained. “My bike and my run was pretty good, I am still 11th in my first Olympics, a year ago I wasn’t even qualified so I’m happy with that”.

Basmla Elsalamoney EGY
Egypt’s first triathlete to qualify for an Olympic Games
ASICS World Triathlon Team
“Getting lapped today is a hard pill to swallow, however, it is the best ever experience in my entire life and definitely I am so proud to be here. The conditions today weren’t the best a triathlete can ask for, but that’s something you couldn’t control. It was never an easy journey, and I have learned a lot during the past three years and grew as an athlete and a person. Being able to meet a lot of new people and making friends from different countries and cultures is extremely amazing. I will try to take the lessons learned here today into Paris 2024 and I hope it could be better.”

“I am so overwhelmed by the plenty of messages and support I got today and during the past week. Thanks a million for all the people who have been cheering for me and waited up late for my race in the Arab region.”

For more information on the schedule and how to watch visit the website.