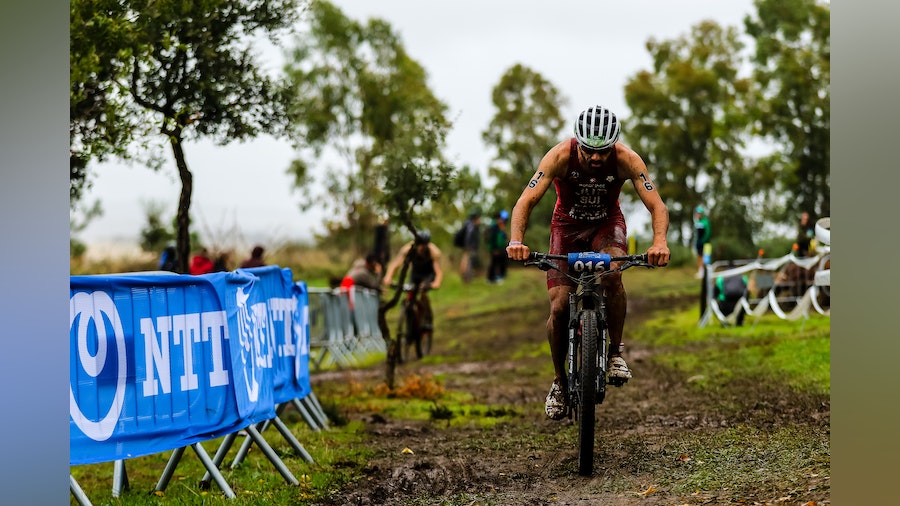 With September’s hotly anticipated 2021 Multisport Festival in Almere unable to proceed as planned due to local Covid travel restrictions, only the Long Distance World Championships could go ahead in the Netherlands, Spain stepping in to host the Cross Triathlon and Aquathlon events in El Anillo - Extremadura and the Duathlon World Championships moving to Aviles.

The year had been kicked off in snowy style with the first ever Winter Triathlon Championships in Andorra, and from there on the action didn’t disappoint, with plenty of surprises, records and breakthrough performances across the five locations. You can watch back some of the year’s best multisport action on TriathlonLive.tv.

—
2021 WORLD TRIATHLON LONG DISTANCE CHAMPIONSHIPS ALMERE
With an impressive run and a new course record, Dane Kristian Hogenhaug took advantage of perfect racing conditions in Almere, Holland, in September to claim the men’s World Triathlon Long Distance Championship title, stopping the clock on 7.37:46. Just over a minute ahead of another Scandinavian, Swede Jesper Svensson, who claimed the silver medal after an intense duel that had them running shoulder to shoulder for over 35km, Brazilian Reinaldo Colucci finished in third place.

Leading the women’s race from beginning to end, local star Sarissa De Vries (NED) followed Hogenhaug onto the top of the podium with the fastest race of her career. Manon Genet (FRA) claimed second place while the bronze medal went to Denmark’s Michelle Vesterby, the three of them stopping the clock well under nine hours of racing.

–
2021 WORLD TRIATHLON CROSS CHAMPIONSHIPS EL ANILLO-EXTREMADURA
On a day full of thrills and spills at El Anillo – Extremadura in Spain, it was Switzerland’s Loanne Duvoisin and Arthur Serrieres of France who came through the wet and wild conditions to be crowned the 2021 World Triathlon Cross Champions.

It was a fast, relatively flat course that clearly suited them both on the bikes as they found themselves well-positioned out of the second transition and out onto the 6km run. The 2019 U23 World Champion Duvoisin then put the throttle down to claim a first full world title ahead of Sandra Mairhofer (ITA) and Aneta Grabmullerova (CZE).

And it was an emotional Serrieres who took his first ever world title having left absolutely nothing out on the course to achieve his dream, fellow Frenchman and defending champion Arthur Forissier crossing for silver ahead of Spanish legend Ruben Ruzafa.

–
2021 WORLD TRIATHLON AQUATHLON CHAMPIONSHIPS EL ANILLO-EXTREMADURA
Spain’s David Castro and Margot Garabedian of France were crowned the 2021 Aquathlon World Champions in El Anillo – Extremadura in late October, as the first of two days of racing for the rearranged multisport world championships delivered plenty of excitement for the Spanish crowds.

Garabedian led out of the water and never looked back, despite the close attention of Sara Perez Sala (ESP) behind. Slovakia’s Margareta Vrablova crossed in third to collect both elite bronze and the title of Junior World Champion.

Castro left it late on the 5km run to pass Richard Varga (SVK) and take the tape. The 28-year-old was third out of the water but a quick transition and slip by Varga as he removed his wetsuit saw the Spaniard out of T1 in second and well set to time his attack. Ander Noain (ESP) crossed for bronze as well as the U23 World title.

–
2021 WORLD TRIATHLON DUATHLON CHAMPIONSHIPS AVILES
The start lists featured a mix of fresh new talent and experienced names for the 2021 World Triathlon Duathlon World Championships in Aviles, Spain, on 6 November, where the race format was across a 10km run, 40km bike and closing with a 5km run.

The men’s field was stacked with all the big names of Duathlon but it was Frenchman Nathan Guerbeur who showcased the ultimate power and control across the entire course to earn the men’s title, compatriot Maxime Hueber-Moosbrugger earning silver and Arnaud Dely of Belgium finishing with bronze.

–
2021 WORLD TRIATHLON WINTER CHAMPIONSHIPS ANDORRA
Andorra welcomed the participants of the 2021 World Triathlon Winter Championships, Naturlandia adventure park, near the Pyrenees town of Sant Julià de Lòria, the setting for more than 200 athletes from all over the world from Junior to Elite.

The 23rd edition of the event, and the first ever in Andorra, consisted of a 6.55km run, 14km mountain bike and 12km cross-country ski, and it was Italy’s Sandra Mairhofer who backed up her Cup win in Asiago with a brilliant run-bike performance to take the world title by almost a minute from Anna Medvedeva and Daria Rogozina (RTF).

In the men’s race, Norway’s Hans Christian Tungesvik showed an incredible performance on the skis to outpace Pavel Andreev (RTF), winner of the previous eight world titles, Giuseppe Lamastra of Italy with bronze. And it was the Norwegians who shone in the Mixed Relay, too, Tungesvik and Elisabeth Sveum combining to claim the world title. Read more here.