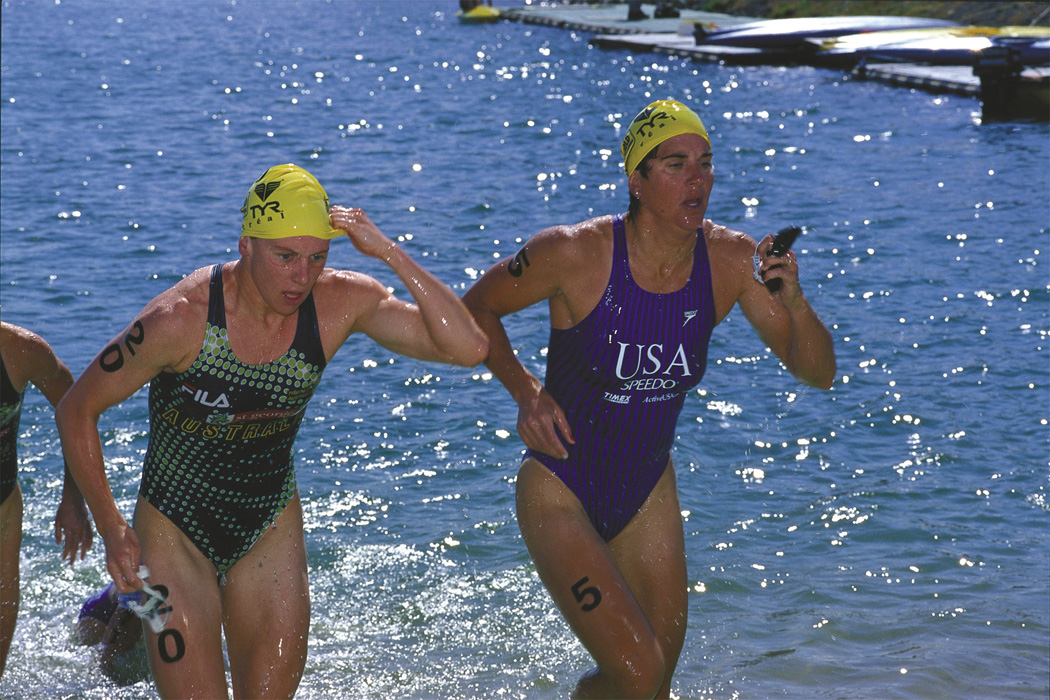 With a swimming background, Loretta Harrop was enticed into triathlon by her brother Luke in December 1994, a keen triathlete himself. After competing locally, both went to a Japanese race in 1996. Loretta finished third, Luke fourth, from then on they decided to turn their attention to triathlon full-time.

Loretta Harrop hit the ITU World Cup circuit regularly from 1997 and quickly worked out the strategy she would become known for. Swim fast, work with a few select others to bike even faster and build an unbeatable lead from which she couldn’t be caught. It worked in her very first ITU World Cup podium, in Sydney in 1997, and then many more.

Some of Harrop’s fondest memories are from the friends she made on tour, and in particular, her merry band of brilliant swim-bikers.

“I would have to say Barb Lindquist and Niki Hackett and I were like the three musketeers, we always tried our hardest together to get away on the swim/bike and ninety percent of the time we did,” Harrop said. “We had a ball doing it too. We would talk, laugh and yell at each other but we had something that worked and it worked best when we all were there.”

In 1999, Harrop was having a brilliant season and was the heavy pre-race favourite leading into that ITU World Championship race in Montreal. The expectations were playing on her nerves. But she managed to calm herself down, listening to her brother Luke talk through the course that he had raced the day before and talk tactics with her friends. It all came together during the race and she was never challenged on her way to the title. Harrop led home an incredible Australian 1-2-3-4-5 finish that day, which was never been repeated in ITU World Championship history.

Harrop was then part of the sport’s Olympic debut, where she finished fifth.

In 2002, the Australian triathlon world was shattered when Luke Harrop died, after he was hit by a stolen car while on a training ride on the Gold Coast. Loretta decided that the best way to honour her brother was to continue racing in the sport that she loved. Just a few weeks after Luke’s death, Harrop won the Australian trials for the Manchester 2002 Commonwealth Games team.

She did not finish that race in Manchester, puncturing early in the bike and pulling out on the run. When it came to the Athens 2004 Olympic Games, Harrop was determined to do well.

She aggressively tackled the bike course in Athens and hit the run course solo. While Austria’s Kate Allen overtook her in the final few hundred metres to win the gold, Harrop had given her all and was happy to claim a major Games medal. She dedicated it to her family.

“That one is for my whole family, my dad, my sister, my brother, my husband, my brother-in-law,” she said. “They’ve all been fantastic and they are my whole world.”
Harrop is now retired from professional competition, but still races the Luke Harrop memorial event each year. She coaches a high school triathlon program and lives on the Gold Coast with her husband Brad, son Hayden and daughter Emmerson.