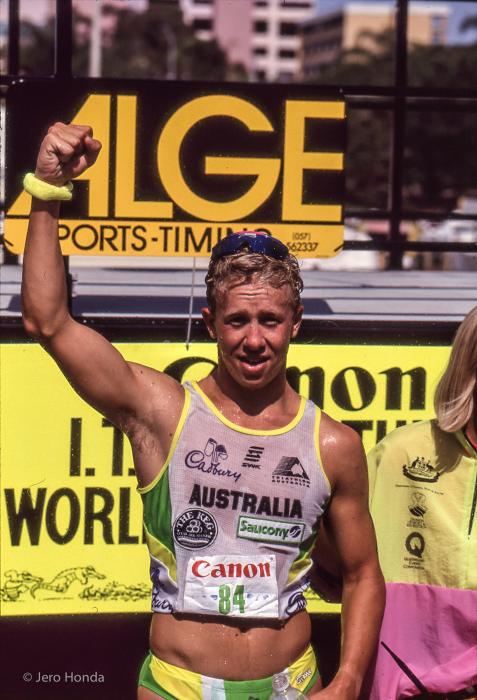 When Miles Stewart finished fourth in the first 1989 ITU World Championships in Avignon, France he was just 18. When he competed in his final ITU race in 2004, he’d amassed a career resume with World Championship and World Cup wins, an Indoor Triathlon World Championship title in front of IOC President Juan Antonio Samaranch, and a Commonwealth Games silver medal. He was in the Australian squad for a record 16 consecutive years. But not one achievement stands out, it’s all of them.

“I think if you ask me if I had a key achievement along the way, it was being able to improve every year for 20 years,” Stewart said “The sport was changing so rapidly, you had to keep changing and keep adapting to keep up. I think if I look back, the thing that I was most proud of was to deal with those changes and still be competitive.

“There was new bikes and body types and people coming to the sport from different backgrounds. We had some really strong swimmers, then everyone became a strong swimmer, and then you had to be a great bike rider. So to get fourth in the world in 1989 and then get second at the Commonwealth Games in 2002, that’s a big chunk of time in an endurance sport.”

Stewart was an accomplished speed skater when he focused on triathlon at 15, after moving to the Gold Coast with his family. Training under his father Col Stewart, who remained his coach for his entire career, he made an impact on the Australian series in the late 80s. That led to his berth in the first ITU World Championship race in Avignon, and after being dropped from the Australian team just days before 1990, he won his ITU world title at home on the Gold Coast in 1991.

“Luckily for me I got to win a World Championships in my home town and I got to race an Olympics in Sydney and a Commonwealth Games in Manchester,” Stewart said.  “My Mum was British and born not far from Manchester so to go to those three events for me was monumental, they were so close to home.”

And another highlight? While racing at the inaugural triathlon event at the Olympics in Sydney, Stewart recalls the only time he suffered ear pain during a race.

“Obviously the Olympic Games in Sydney was about as monumental as you could get for an Australian athlete born in Sydney,” Stewart said. “To have 300,000 watching the triathlon was just amazing. The thing that I tell people is that, at the two kilometre mark of the run… I had to put my hands over my ears because my ears were hurting. It was that loud. Of all the things that would get sore in a race, your ears weren’t normally one of them.”

Stewart stepped away from the sport for a few years post retirement in 2004, to focus on his family and career outside sport, but in 2014 is a member of the Triathlon Australia executive board and chair of the selection committee.