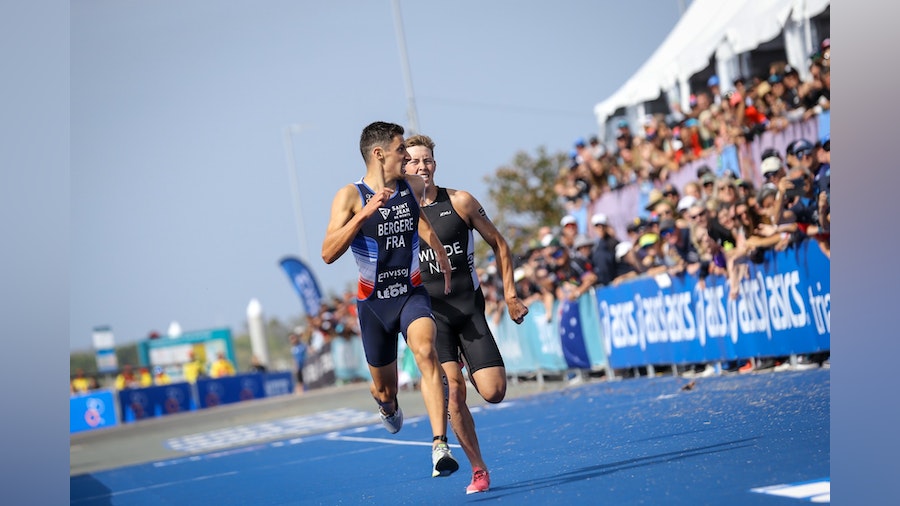 Two incredible individual triathlon races down, one spectacular team relay to come. The stage is set for Tokyo 2020 to witness arguably the greatest team competition of the Olympic Games: four world-class athletes, two women, two men, each tackling all three disciplines and with all the grit and grind of triathlon fizzing across the super-sprint format. It may be its Olympic debut in Tokyo, but wherever you are watching, it is the hottest ticket in town.

The Odaiba Bay venue is the same as the individual, the course more compact. Each leg will start with a 300m swim, transitioning into a 6.8km (two lap) bike and finishing with a 2km (two lap) run. This will be full gas from the start, the leaders will chop and change, the handovers will be spectacular, the tension will reach boiling point and the team that eventually takes the tape and wins those first ever Triathlon Mixed Relay Olympic gold medals will be forever written into the sport’s history. 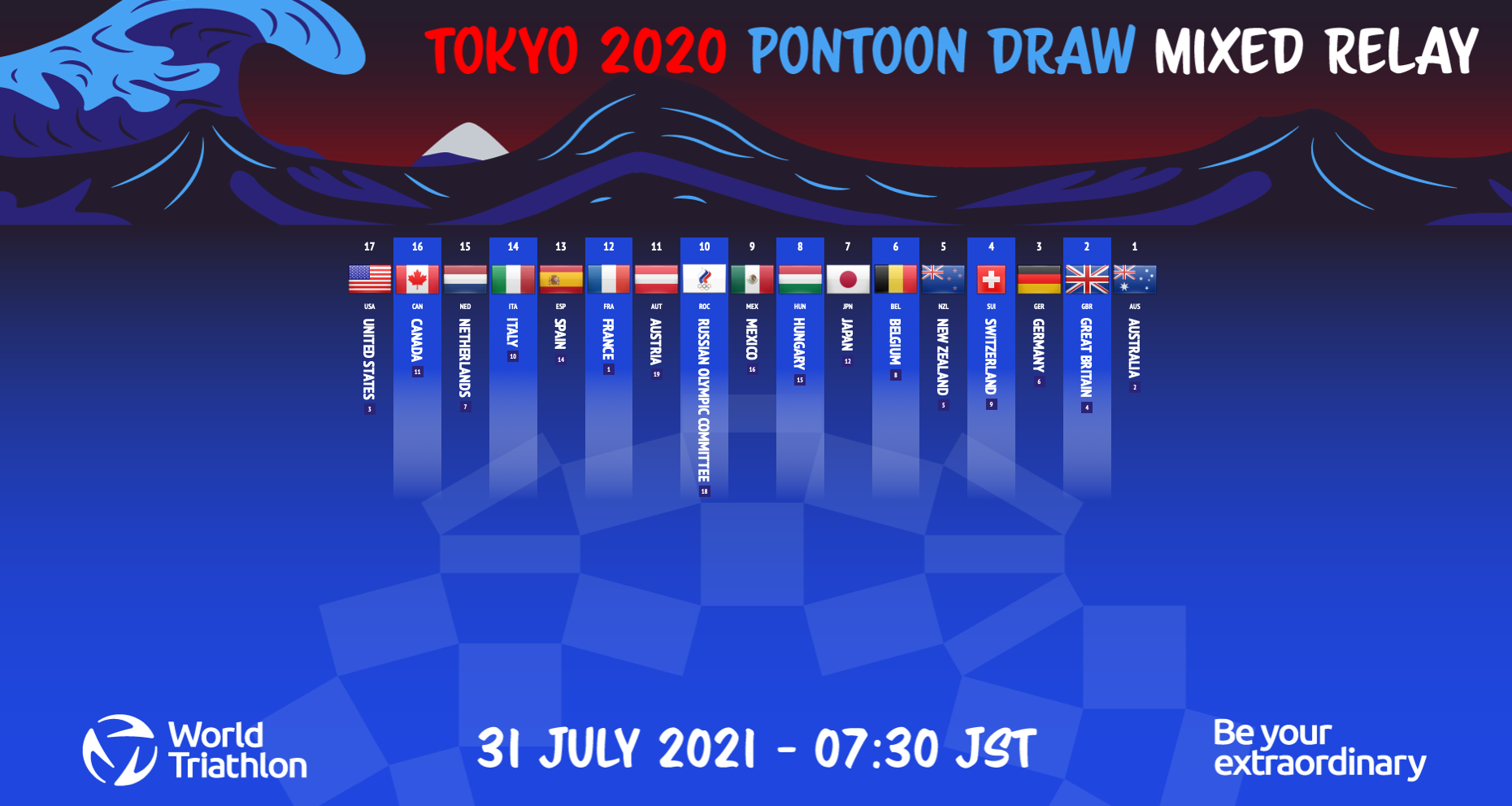 There will be 17 teams taking to the pontoon start, South Africa sadly having to withdraw after Henri Schoeman suffered a stress fracture in his foot on Monday. For the remainder, the squads were officially submitted and pontoon draw made at Thursday’s briefing. The final line-ups confirmed two hours before the start of the race, with late changes and team tactics all part of the beautifully unpredictable format.

At the draw, France set the tone choosing a relatively central start position, whereas the USA will set up on the near side to the transition area, Australia and Great Britain on the far end of the pontoon.

Unlike the individual race, however, the start lists are drawn from the world rankings, meaning Team France – World Champions the past three years in a row – will wear the number ones. Leonie Periault and Cassandre Beaugrand go out first and third just as they did in the team’s 2018 and 2020 title wins, with Vincent Luis on the final leg, Dorian Coninx will race leg two. There will be massive extra incentive for the talented squad to leave Tokyo with a medal, and a good start will be vital to settle the nerves.

Second-ranked Australia were the only nation to have qualified the maximum three men and three women for Tokyo 2020, bringing both the added bonus of a wider pool of talent to choose from and the agony of choice for the selectors. The line ups have varied in recent years, but the team starting on Saturday morning will see Emma Jeffcoat out first for the opening leg, with Ashleigh Gentle on leg threejacob_birtwhistle’>. Jacob Birtwhistle is widely considered to have one of the strongest final legs in the business, Matthew Hauser takes the second.

Team USA wear the number three, with Olympic bronze medalist Katie Zaferes out first hoping to set the team up well. Perennial podium finishers in recent years, you have to go back to Nottingham 2018 for their last team gold, but Morgan Pearson will want to put in a massive final leg after a disappointing individual result by his recent standards, while Kevin McDowell will still be riding high despite the exertions of his sixth place finish just a few days ago. Taylor Knibb steps in as a late switch for Summer Rappaport in leg three.

Wearing number four will be Team GB, and with three Olympic medalists to call upon: Alex Yee (final leg) Georgia Taylor-Brown (third leg) and Jonathan Brownlee (second leg). Jessica Learmonth will once again be given the responsibility of setting the team up, while Brownlee was involved in all three of Great Britain’s World title winning teams in 2011, 2012 and 2014 and could become the most decorated Olympic triathlete of all time if they podium here.

New Zealand will wear the five, a young team but with great experience already having raced together multiple times and most recently won the U23/Junior World Championships in Lausanne back in 2019. Hayden Wilde and Tayler Reid both had outstanding individual races, 23-year-old Wilde winning Olympic bronze, Ainsley Thorpe will want to bounce back from bad luck early on the bike while Nicole Van Der Kaay, the oldest of the team at 25, finished a strong 29th on Tuesday.

Team Belgium – aka The Belgian Hammers – can really hit their groove when the quartet of Claire Michel, Jelle Geens, Valerie Barthelemy and Marten Van Riel line up together. Bronze at the European Championships, winners of the qualification event in Lisbon, Geens was sadly missing from the individual races on Monday and touched down in Tokyo fresh, hungry and determined to help the team to the podium. As long as Claire Michel’s calf injury is not as bad as first feared, the Hammers will be big contenders.

Team Germany’s selection criteria for the Olympic Games made their priorities clear: they held a qualification event over the super-sprint format that saw Anabel Knoll and Justus Nieschlag confirmed alongside Laura Lindemann and Jonas Schomburg for the team. The Netherlands left their two men off the individual start and keep them fresh for Saturday morning, while Rachel Klamer delivered a majestic fourth-place finish and Maya Kingma recovered from a difficult start to finish 11th and will be ready to help power the Dutch into contention right from the start horn.

Switzerland were the first ever World Champions back in 2009 and will have the combined talents of Nicola Spirig, Jolanda Annen, Max Studer and Andrea Salvisberg lining up, all capable of delivering the magic required to scoop that Olympic medal. Like Brownlee, a medal in Tokyo would see Spirig become the triathlete with the most Olympic medals in history

Spain will have Mario Mola and Fernando Alarza teaming up with Miriam Casillas Garcia and Anna Godoy Contreras. Italy count on Angelica Olmo, Verena Steinhauser, Gianluca Pozzatti and Delian Stateff and Canada will be backing themselves with Joanna Brown and Amelie Kretz joining forces with Matthew Sharpe and new arrival Alexis Lepage, who was brought in the team hours before the Coaches meeting this Thursday due to the injury during the individual race of Tyler Mislawchuk.

Bence Bicsak stormed to 7th place on Monday and he, Tamas Toth, Zsanett Bragmayer and Zsofia Kovacs will line up for Team Hungary, the Polyanskiy brothers Dmitry and Igor, Anastasia Gorbunova and Alexandra Razarenova go for the ROC and Irving Perez, Crisanto Grajales, Cecilia Perez and Claudia Rivas are set to go for Team Mexico.