“The race was really hard for me because of the altitude because I am not training at attitude the swim was okay but on the bike my muscles feel not so good. On the run I feel maybe okay and feel good to win the race. It was only the last 800m that I pushed really hard to make the win, I didn’t feel very good but I pushed hard to the finish, I am very happy, this is my first victory in the World Cup races.”

A large bunch of 50 emerged out of T1 together, riding together on the rolling and scenic course around the East Lake complex in Jiayuguan City. That calm was broken however when Aleksandr Latin (EST) made a breakaway and was joined by Jonas Schomburg (ITU) and Eric Lagerstrom (USA), establishing a lead of over a minute into T2.

The effort though was quickly evident as the chase pack made quick inroads, taking over 30 seconds off that lead in the first 2.5k loop, and the writing was on the wall as the eventual medalists strode their way to the front of the race and took control, with Turbayeskiy running clear in the final kilometre.

Jarrod Shoemaker reflected on a second top five performance in a World Cup race in China this year, after his 5th in Chengdu last month.

“I guess I like China right? It was an interesting race being at attitude, I have been training in Boulder at the same altitude and I know you cannot drive hard in these conditions. I was smart in the swim, just stayed up there, the bike was interesting, it was so rolling and no one wanted to do much work but equally it was hard to get to the front.

“I definitely feel good, a 5th and a 2nd in World Cup racing this year, I know I have a job to do, it is another level from World Cup to World Series racing, the bike is probably the biggest difference. I am excited for Edmonton, I think it will be fun to see how I go against the best guys but the big goal is Rio so it is baby steps at the moment.”

Polyanskiy was delighted with a podium in what has been a tough season.

Women’s Review
In the women’s race it was a maiden World Cup win for Maria Czesnik (POL) as she too showed great patience to run to victory from Yurie Kato (JPN) and Ditte Kristensen (DEN).

“I am really very happy, this is my first victory, I was suffering on the run and I had some problems at the end of the swim I was losing my legs but I had to push a little on the bike to catch the girls but in the end it came. I could see them on the run, my running shape is not that good this year so I was afraid they would catch me so I was pushing as hard as I could. I think the last five races were in the same conditions so I am used to it now I think.”

A group of 15 broke clear early on the bike but the big news was the withdrawal of top seed Yuka Sato (JPN) due to an ankle injury. That and the sight of Lisa Perterer (AUT) over a minute down out of the swim gave the leaders a boost as they built a lead of over two minutes into T2.

The run sorted the contenders from pretenders with Czesnik, Kristensen and Kato breaking clear. The Polish athlete made her move late on the first lap and it would prove to be the winning of the race as she stayed clear of Kato and Kristensen, as both recorded their first ever World Cup podiums.

Kato was all smiles upon finishing.

“Today is a very good day, I am very happy with my race. It is very hot but no problem for me, I enjoy the heat. This is my first podium in a World Cup so I am very happy.”

Likewise Kristensen was delighted, having surpassed her initial goals by some margin.

“This is pretty amazing, this is only my second World Cup and I am in my final junior year. My goal was top 15 so to come third is incredible and I can’t believe it. I didn’t have the legs to catch Maria, for me it was about splitting even and I am not used to the heat so I was scared I was going to break down so I am just very happy I kept my pace.”

“It was a positive race today, many of them were aggressive and attacked the race and left nothing to chance and we ended up with some positive results which was good. Some are veterans and some are new on the scene and the older guys teach the others a bit. It is all about experience but one of the big things that comes out of the team environment is they all feel comfortable and know they have support on race day and that is reflected in the positive nature of their racing and the outcomes.” 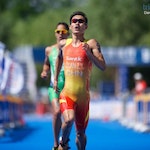 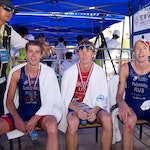 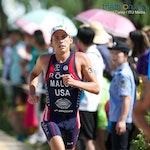 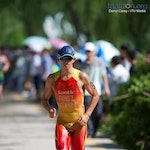 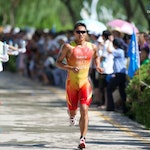 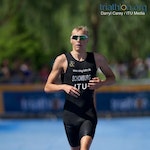 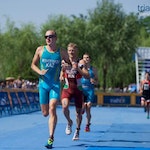 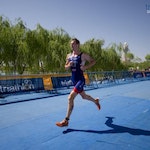 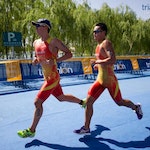 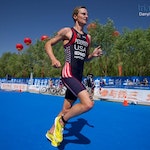 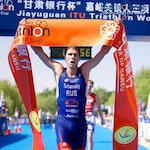 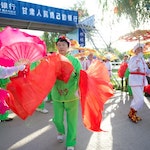