by Erin Greene on 12 Sep, 2013 11:41 • Español
Australia's Charlotte McShane produced a finishing chute sprint masterclass in London to win the 2013 Under23 Women's World Championship title ahead of Canad...

Australia’s Charlotte McShane produced a finishing chute sprint masterclass in London on Thursday to win the 2013 Under23 Women’s World Championship title ahead of Canada’s Ellen Pennock and Amelie Kretz.

Working together proved the successful strategy for the women’s Under23 race, which saw a pod of women stick together from start down to the final metres, producing a four-way battle for three medals. Charlotte McShane (AUS) put up a furious effort down the finish chute, digging deep enough to win the women’s Under23 World Title.

McShane said she was honoured to be now on the elite list of those who have won U23 World Championships previously.

“I’ve been training really well for the last few years but haven’t quite put it into performance, so I just cannot believe I managed to do it today,” McShane said. “I guess that’s the most special thing to me, is some of the names that have won this before and that’s when it really sinks in.”

Pennock was glad the crash hadn’t derailed her day and she was able to come back, although she said afterwards that crashing in a World Championship race wasn’t unfamilar.

“In my first junior worlds I actually crashed twice and so I started to get a little down, ‘oh no, not again,’ but luckily it was fine I had enough time out of the water so I was able to get with the second pack,” Pennock said.

Earlier in the day Lucy Hall (GBR) was up to her usual dazzling swim skills, sizzling out in front to lead alone on the two-lap swim. She nearly tripled her 13-second lead by the end of the swim, with Australia’s Natalie Van Coevorden, Sara Vilic and Pennock the closest athletes to Hall more than 30 seconds back.

While Hall forged ahead, the trio fell behind to make a 17-person chase pack when Pennock crashed on her bike. The group included several pre-race favourites including McShane, Kretz, 2012 bronze medallist Joanna Brown (CAN), Hanna Philippin (GER), Emmie Charayron (FRA) and Alexandra Razarenova (RUS). The sizable group slowly chipped away at Hall’s lead, pulling slightly closer midway through the race.

The second half of the bike course proved pivotal, as the chase group chopped 20 seconds off their gap to the Brit on the fifth lap. They worked together over the next three laps to successfully bridge up just in time for the three-lap run.

A pack of ten woman immediately set out to split up the large bike group early on the run. In a game of hurry up and wait, Tamsyn Moana-Veale (AUS) and Charayron were the first to be dropped midway through the course. Sophie Corbridge (NZL) was picked off next to make it a flurry of five to the finish. In the final stretch towards the podium, 2012 bronze medallist Brown fell just off pace, while McShane and Pennock charged ahead.

The pair sprinted down the blue carpet, but it was McShane’s day to claim the world title as she lunged for the finish tape just one second ahead of Pennock for the win in . The Canadian took silver in 1:55:39, while her teammate Kretz collected bronze in 1:55:41. 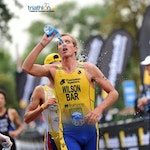 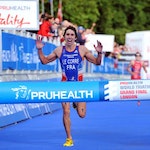 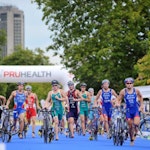 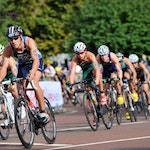 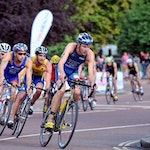 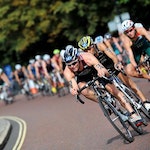 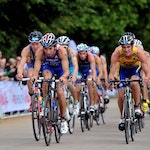 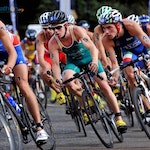 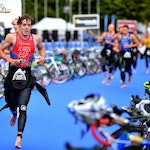 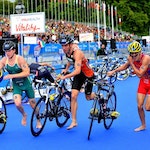 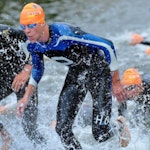 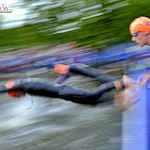