In practically a line-to-line dominate performance, the United States crushed the 2016 ITU Triathlon Mixed Relay in Hamburg for its first-ever World Championship Title.

While the U.S. enjoyed a sizeable lead that erased any fear of being caught on the final leg, there was a mad jostling for silver and bronze among three teams behind the Americans. For the second consecutive day, silver place would be determined by a sprint finish, with Australia again in the mix. Olympics-bound Ryan Bailie anchored the Australian team, scoring silver with a last ditch plunge over the finish line. In the three-way race for the podium, home nation of Germany took bronze by just edging out France for third, much to the delight of the crowd.

With ideal racing conditions, thousands of spectators gathered around the city’s town hall to watch what has become one of the most exciting disciplines in the sport. Mixed Relay sees each team member complete a mini triathlon alternating in the order woman-man-woman-man.

Early in the race, Gwen Jorgensen got her team a head start when she used her signature run speed to tag off to teammate Ben Kanute ahead of Germany’s Laura Lindemann and France’s Cassandre Beaugrand.

Although Kanute enjoyed an 11-second lead thanks to Jorgensen heading into the short 300m swim, Aurelien Raphael (FRA) pulled his way up to Kanute on the one-lap swim. But Kanute then served as a key player in the U.S. team’s route to gold as he pumped out an impressive performance on the bike to give his team a lead so large it would be insurmountable for the remainder of the race.

“I don’t even know, I just went as hard as I could. On the bike I was feeling really good, and me and Raphael were not working the best together, so I just punched it through a few corners and found myself on the front and just went after it,” Kanute said of his relay leg.

Behind him, France’s Raphael rode solo but South Africa’s Henri Schoeman hunted him down by the run for the two nations to tag off close together. While it appeared the U.S., France and South Africa were in the clear for a medal, Russia, Great Britain and Australia had other plans for the podium, making the third leg a pivotal point in the race.

First, Russia’s Alexandra Razarenova performed brilliantly on the swim to catch France’s Audrey Merle and South Africa’s Gillian Sanders. The three rode together on the two-lap bike, but Great Britain’s Jodie Stimpson pushed out a furious pace on the bike with the help of Australia’s Emma Jackson. Together, they caught the wheel of the leaders making it a five-nation race for silver and bronze.

Great Britain looked strong with Stimpson steady on the run but a wrong turn meant their lead would be reduced, eliminating any chance of a boost onto the final leg. With the U.S. enjoying nearly a minute lead when Kirsten Kasper tagged off to anchor Joe Maloy, he kept the USA strongly out in front during his race, sailing over the finish line into the arms of his teammates.

“I think you said it, the key word is ‘team.’ I crossed the line, but we shook hands in between legs of the relay and I just could not have done it without these guys. We compete all the time individually, so it is nice to group up because there is a lot of stuff behind the scenes with comrade, so this is kind of a visual example of it, so it is really cool,” Maloy said of his team earning the title.

However, a battle was underway behind him. As the chase all rode together over the two-lap 6.6km bike course, they left it all down to a foot race to determine the top three. Entering the final leg of of the final athlete, it was anybody’s race as France’s Anthony Pujades, Australia’s Bailie, and Germany’s Gregor Buchholz ran onto the blue carpet together. Buchholz and Bailie jumped slightly in front of Pujades. Then the pair pumped their way to the finish line, with Bailie out running Buccholz ever so slightly for silver. 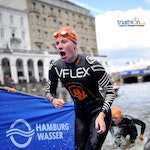 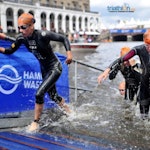 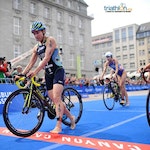 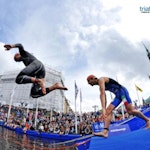 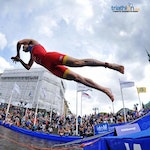 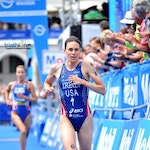 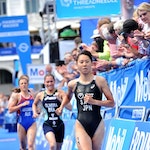 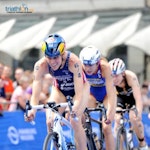 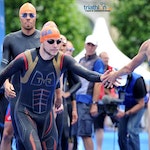 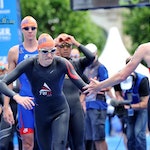 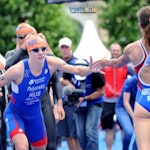 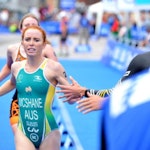