A superb run from New Zeland’s falcon Hayden Wilde got him on top of a World Triathlon Championship Series podium for the first time of his career, after outsprinting Frenchman Leo Bergere with 2.5km to go to grab the tape at AJ Bell WTCS Leeds. The bronze medal was for Germany’s Lasse Luhrs, also the first WTCS podium of his life.

The morning was surprisingly sunny in Leeds this Saturday to welcome the 55 athletes lining up for the 6th edition of the WTCS Leeds, and it was clear from the gun that the key to success in this hilly and technical course would be to stay upfront in the lead group no matter what.

Leading the men out of the 750 wetsuit swim was once again Hungarian Mark Devay, who has sown magnificent swimming skills in the last races and managed to start the long run up to transition a couple of seconds ahead of one of the youngest athletes in the field, Miguel Hidalgo (BRA), and the powerful Frenchmen, Leo Bergere, Vincent Luis, Pierre Le Corre and Tom Richard entering transition ahead of the big pack.

A smooth and efficient transition gave Bergere and Vincent a 10 seconds margin over the likes of Alex Yee (GBR), Jonathan Brownlee (GBR), Marten van Riel (BEL) or Mathew Hauser (AUS). And it proved to be enough for both Frenchmen to breakaway in the first uphill out of transition.

With a large pack behind them they knew that the chase will not be easy, so ahead they went and by the time they were halfway through the 20km bike course, they had almost 1 minute over the big chase group. Behind them, when the pack was starting to get organised, a crash ended with Alex Yee, Jonny Brownlee and Dylan McCollough (NZL) on the ground and out of the race, and the pack being a bit more cautious on the downhill leading up to transition on each lap.

While the two leaders managed the 5 laps of the bike course quite easily, behind them the strong bikers like Richard Murray (NED), Antonio Serrat Seoane (ESP), Jelle Geens (BEL) or Vasco Vilaca (POR) took turns up front the pack, while behind them, Norwegian Gustav Iden was trying to catch up after a less than ideal swim that left him with not many chances.

When everything looked like a head-to-head run race for Luis and Bergere, with over 30 seconds with the large pack, the two-times world champion miscounted the laps on the bike and just flew through transition looking shocked just to stop barely before hitting a fence, to then turn around and go back to transition to rack his bike. By the time he was on his shoes, Leo Bergere -looking shocked as well- was out on the run alone and the large pack was already in transition.

And even though Bergere had a seizable gap with the chasers, right from the first kilometer Wilde charged hard, and decided to catch the Frenchman as soon as possible. It took him one lap on the hilly run course -2.5km per lap- to just never look back behind him and head the fast and furious downhill on the blue carpet to the finish line to grab the tape and claim the first WTCS victory of his career. Wilde set the fastest split of the day on the run, 14.11 run split that was enough also to put him in the second place in the Maurice Lacroix World Triathlon Championship Series ranking.

“I have mixed emotions right now”, said Wilde after crossing the finish line. “I’d like to firstly apologise to Jonny Brownlee, Alex Yee and my teammate Dylan McCullough. Up the hill, Dylan (McCullough) had his shoulder out a touch, a bit of wind blew, I hit him and a few people came down. That’s how racing goes. It’s bitter-sweet. I am really sorry for Jonny and the British boys, it’s their home town and I really wanted to race them properly. Other than that, I tried to go out in front and chase Vincent (Luis) and Leo (Bergere) but they were just too strong out there today on the bike. I actually thought I blew my legs up, I really struggled on the first hill but then started to get some momentum and then just found the legs on the second lap and just went for it,” he explained.

Behind him, Bergere managed to stay ahead of the chasers to claim the second place, best position on a WTCS of his career after four third place finishes, enough for him to retain the Series Leader position. And a magnificent downhill sprint gave Germany’s Lasse Luhrs his best ever result as well, first WTCS podium for the German after beating by inches Portugal’s Vasco Vilaca.

It feels like a win because I really put everything inside this breakaway with Vincent (Luis). I am really happy to share this intense moment with my teammate and friend. He had a bit of bad luck in T2, but it was good sportsmanship and it didn’t work for the win but congratulations to Hayden (Wilde), he was just strong and that’s it for today, ” said Bergere. “In the first lap I tried to play a mental game with Hayden (Wilde) to see if he would push anywhere until the end but I knew he was a beast and mentally as well. I didn’t have anymore in my legs, I just made it to the finish line in second and happy about that.”

“I am a little bit overwhelmed and speechless, after my disappointing last season. Today i am just very thankful for the people that stood behind me, I am very happy, ” said a delighted Luhrs.

His teammate Lasse Nygaard-Priester managed to finish in 5th place, winning a sprint with a little group of athletes that included Miguel Hidalgo, Richard Murray, Jelle Geens, Antonio Serrat and Vincent Luis, that closed the top ten after serving a 10 seconds penalty for dismount line. 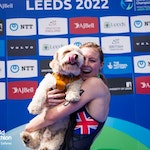 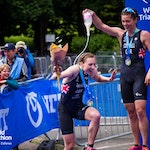 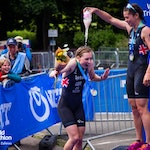 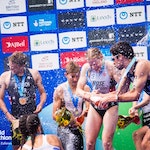 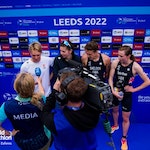 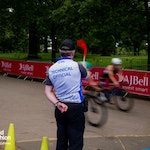 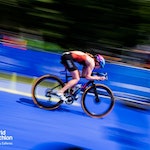 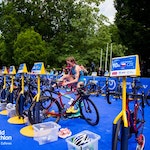 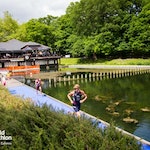 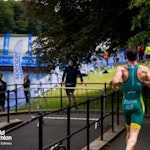 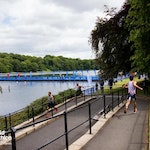 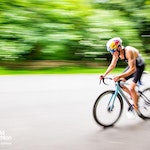