Erhard Wolfaardt successfully defended his Africa Triathlon Championship title, and Kate Roberts used her run to win the ladies race in Durban on Sunday 9 May.

Sander Berk was the overall winner in hot and humid conditions, but as he competes for the Netherlands the title of Africa Champion went to Erhard Wolfaardt who finished second overall.

Berk (NED), Hendrik De Villiers (RSA), Erhard Wolfaardt (RSA), Chris Felgate (ZIM), Wikus Weber (RSA/U23) and Moracco’s Medhi Essadiq were out of the water first in the two-lap, 1500-metre swim. De Villiers had a slight complication as he was stung by blue bottles in the choppy sea and was worried about a reaction, but thankfully that never materialized.

Once out on the bike (40km divided into 5 laps of 8km), the 6 worked together until Christopher Felgate had a puncture and fell off the pace, losing three minutes in the process. Behind them Richard Murray was desperately trying to close the gap on the leaders on his own. His swim was once again the chink in his armour. With no company, he was unable to draft back to the leaders who were all working together.

As expected it was the run that proved to be crucial. Mehdi Essadiq quickly fell off the pace. De Villiers lost touch with Berk and Wolfaardt after 4km. Wolfaardt then put in another attack and opened a gap on Berk, but started to cramp, which allowed Berk to come back, close the gap and pass Wolfaardt. Berk crossed the line first in 1:55;13. Wolfaardt was 43 seconds behind with De Villiers coming home third a further minute down.

In the battle for the U23 title, Richard Murray came screaming through the bike leg and used his run to take the U23 title ahead of Bernd Burger and Wikus Weber.

The ladies race also came down to the run and Kate Roberts’ work done “down under” (training in Canberra, Australia) paid off as she opened a 5-minute gap on Mari Rabie. The two were out of the water together and rode well together on the bike, but the many twists and turns on the run, the heat and humidity, and sheer pace of Roberts saw her open a lead of 5 minutes on Rabie.

“I’m very happy, everything came together perfectly and I won,” Roberts said afterward. 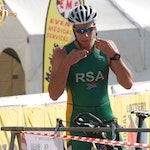 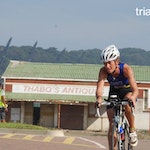 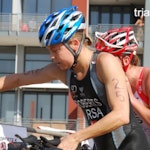 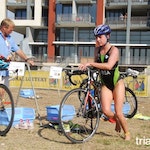 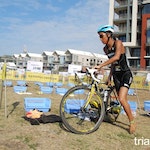 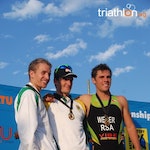 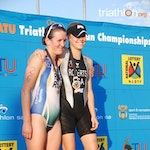 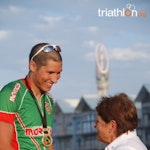 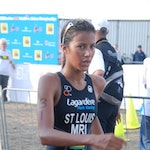 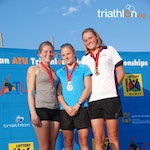 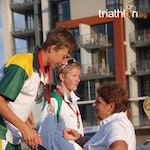 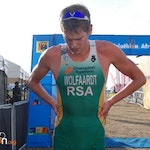