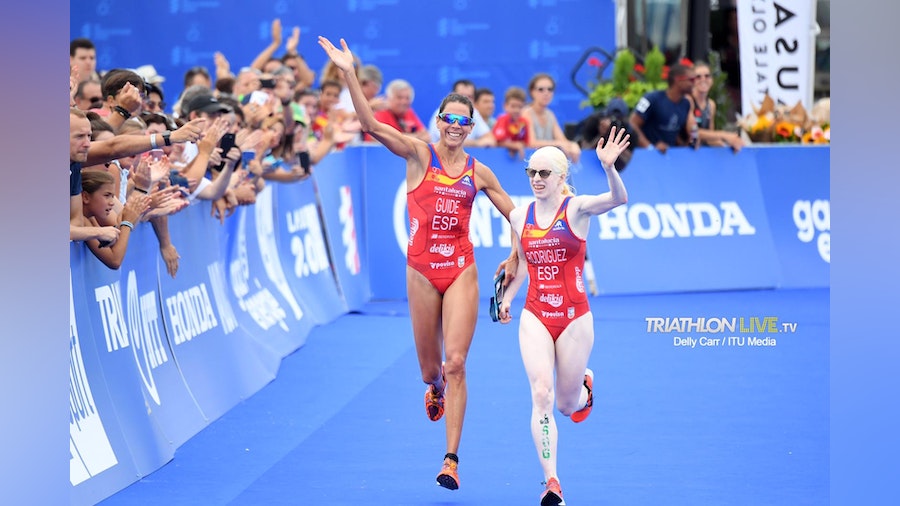 The world’s best paratriathletes gathered for the 2019 Grand Final on Sunday afternoon, where 12 superb World Champions were crowned. The course was always going to test the technical abilities as well as the power on the bike and, with nowhere to hide, it truly brought the best out of the stacked fields across all classes.

PTVI
First off were the visually impaired PTVI athletes, with Jose Garcia and Brad Snyder making it through T1 with some daylight behind but the second wave with Dave Ellis (GBR) and Hector Catala looking to make up the gap once out of the water themselves. Meanwhile Canada’s Jessica Luomela was also already getting on to her tandem and hoping to stretch her lead.

It was an impressive display on the bike as she flew into the corners and made light work of the climbs, but there was always the imminent threat of 2018 World Champion Susanna Rodriguez closing in once the run was underway.

Catala was able to get the edge over Ellis and Aaron Schiedies (USA) and carve out a decent advantage, stretching away over the final lap to take the tape in style, 50 seconds ahead of Ellis in second, the American taking the bronze. Rodriguez did indeed catch and pass Luomela and Melissa Reid (GBR) to secure another world title by an incredible two-minute margin over Reid, Luomela finishing in third.

PTWC
Australia’s Nic Beveridge put in a superb swim in the men’s PTWC to put himself into a good position for a tough handbike course. Unfortunately for him, Jetze Plat was also strong through the water and once more proved untouchable on the bike. Almost three minutes faster than compatriot Geert Schipper on the middle segment, that set Plat up for another grandstand finish, his fourth consecutive World title. Schipper came home in second almost six minutes back, Joe Townsend putting together a fine run to grab the bronze.

In the women’s race, the day belonged to Lauren Parker, who was second fastest in the water behind Netherlands’ Margret Ijdema before grabbing the tough bike section by the horns and devouring the hills to put herself into pole position heading into T2. USA’s Kendall Gretsch put herself into a podium position with an incredible run, but it wasn’t enough to catch the flying Australian, Germany’s Christiane Reppe coming home with the bronze.

PTS5
Another excellent George Peasgood (GBR) swim saw him off to a great start in the men’s PTS5, Martin Schulz (GER) also going well heading into transition and out on the bike. Stefan Daniel was in good shape in the water, however, and was fastest on the bike to set himself up for a big finale. Once into his run shoes, it was again the Canadian who was fastest over the final 5km, Martin Schulz unable to stay in check but finishing with a hard-earned silver, USA’s Chris Hammer delighted with an excellent bronze.

In the women’s race, it was another gripping tussle between British duo Claire Cashmore and Lauren Steadman that was the story of the race from start to finish. Steadman started the stronger, with Grace Norman also exceptional over the 750m swim, but it was a bike course that suited Cashmore and she soon made up the ground over the three laps.  Steadman held firm while Norman dropped off the pace, but down the final chute it was to be Cashmore who had the reserves to kick on, taking the tape three seconds ahead of her teammate, a delighted Norman with bronze.

PTS2
Jules Ribstein brought home an unforgettable gold with his family watching on. Having only been racing since 2017 and finishing with the bronze 12 months ago, the World title was testament to a year that had already seen two WPS golds in 2019. Andrew Lewis couldn’t match the Frenchman on the Lausanne hills, Great Britain’s star coming home for the silver, Netherlands’ Mauris Morsink crossing for the bronze.

USA’s Alyssa Seely was again strong through the water in the women’s PTS2 swim, but it was Japan’s Yukako Hata with all the clear water before being caught in transition and heading out to tackle the bike course with Hailey Danz (USA) and Great Britain’s Fran Brown for close company. Brown was untouchable on the bike, however, opening up enough of an advantage to mean that even a late surge from Seely wasn’t enough to prevent Brown taking the title by 50 seconds.

PTS3
It was another day to remember for Daniel Molina as he surged away over the 5km run to take the tape and a third successive World title. There would be no catching the experienced Spaniard despite the best efforts of Netherlands’ Nico Van Der Burgt on the bike, who showed no sign of letting up the pressure on the testing course as he powered home for glory, the Dutchman in second, Chebotarev of Russia taking home the bronze.

France’s Elise Marc returned to ITU racing for the first time since finishing second at the 2018 Grand Final on the Gold Coast, getting underway with another solid swim on the heels of Ireland’s Cassie Cava. Russia’s Anna Plotnikova brought herself back into contention with a rapid first transition and excellent bike segment, and though clearly closing in on Marc over the final stages of the run, she simply ran out of track, Marc grabbing a second World title following gold in Rotterdam, Plotnikova in second, Cava with the bronze.

PTS4
Alexis Hanquinquant recovered from disappointment at the Tokyo Test Event a fortnight ago to deliver the World title for the third consecutive year. The Frenchman was right alongside Brazil’s Marcelo Collet coming out of the 750m swim but, by the time he was through transition, had the luxury of daylight behind him and never looked like relinquishing the lead, producing the fastest split over all three segments. China’s Jiachao Wang was rapid on the run, powering his way into second place ahead of Alejandro Sanchez Palermo.

Great Britain’s Hannah Moore capped another amazing season with a second World title in her short two years in the sport, starting with a brilliant swim that took her so clear of the field that even Elke Van Engelen’s lightning fast bike segment couldn’t make significant inroads into her lead. USA’s Kelly Elmlinger delivered the fields fastest run split by more than two minutes, taking her into the silver medal position, Van Engelen leaving with the bronze.