by Olalla Cernuda on 15 Sep, 2017 11:17 • Español
Twelve world titles went up for grab today in Rotterdam at the 2017 ITU Paratriathlon World Championships, with 163 paratriathletes competing in all six classes, and with Great Britain getting the most out of the day, grabbing a total of eight medals, followed by USA with six and Australia with four. Parathletes covered a sprint-distance course featuring a 750-meter swim, 20-kilometer bike and 5-kilometer run

Twelve world titles went up for grab today in Rotterdam at the 2017 ITU Paratriathlon World Championships, with 163 paratriathletes competing in all six classes, and with Great Britain getting the most out of the day, grabbing a total of eight medals, followed by USA with seven and Australia, Spain and France with four. Paratriathletes covered a sprint-distance course featuring a 750-meter swim, 20-kilometer bike and 5-kilometer run.

PTS5
Staking claims on the first named title of the day and of the Grand Final weekend, Canada’s Stefan Daniel collected his second World Title in three years. True to Daniel’s racing style, it was his strength on the bike and run that earned him the crown. Exiting the swim over 30 seconds down from Great Britain’s George Peasgood, he closed the gap on the first lap of the bike to get into the lead position. He then never lost it and ran into the finish chute to grab the tape for his first title since 2015. Coming in second was Spaniard Jairo Ruiz Lopez just a little over a minute behind Daniel, while the bronze went to USA’s Chris Hammer.

In the women’s race USA’s Grace Norman had an epic come from behind performance on the run in order to be granted victory for her second straight world championship. Norman exited the waters first, but then was passed by Great Britain’s Lauren Steadman on the bike. Steadman held onto her lead all the way through T2 and the first lap of the run. Norman trailed just 18 seconds however entering the bell lap and it was in the final metres where she caused the change in leadership. Norman then squeaked by to cross the line and claim the 2017 Rotterdam title. A title she won in the same location the year before, in addition to the Rio de Janeiro Paralympic gold.
Steadman earned the silver finishing just four seconds short, while third place then went to France’s Gwladys Lemoussu.

PTVI
Great Britain earned its first title of the day in the men’s PTVI sport class when Dave Ellis took first place on the day. Ukraine’s Vasyl Zakrevskyi was the swim leader from the start and carried his lead all the way through the bike leg. Looking like he would secure the title untouched, slowly Ellis worked on the run to inch down the gap. The 30 second gap he had after T2, he made up for on the first lap of the run and entering the bell, he was the new race leader. The final lap he then held tight to the lead and he grabbed the finish tape for this first-ever World Title.

The silver went to USA’s Aaron Scheidies, who also had a comeback race to finish in the second position just a short 12 seconds after Ellis. While Zakrevskyi took third, getting his fifth world championship medal of his career.

On the women’s side, Aussie Katie Kelly took the over two-minute deficit from the swim and hammered away on the bike to become the race leader. Her power then never slowed down, and despite using a slower more cautious strategy on the bike with her guide Michellie Jones, they never were threatened out of the first position. Kelly only increased her lead and joyfully entered the finish chute with a healthy-created lead of 1:14. The victory kept her winning streak in tact as she first won the world title in Chicago in 2015, followed by the gold medal in the Rio Paralympic Games last year.

Kelly said of how the winning streak continues, “It does, but it doesn’t come any easier. It was a tough field out there today, a lot of those girls raced here last year and it was our first time. You know anything can happen in a triathlon race, lucky the conditions were good. But it is always a bit surreal when you finish first, I am very excited.”

PTS4
Despite having to serve a ten-second penalty for an irregular transition, Frenchman Alexis Hanquinquant had a dominating performance to earn the men’s PTS4 world title by over two minutes. Leading out of the swim, his first transition caused the penalty and an addition to his time. However, penalty or not the lead was never lost. Hanquinquant headed out onto the bike still holding firm to the leader position and never slowed down to allow anyone of threatening that. The run was no different and he soared through the course to claim his first elite world title of his career. It also solidified a perfect season, as he remained undefeated all year long. The silver was awarded to Steven Crowley of Great Britain, while finishing off the podium was USA’s Jamie Brown who took third.

While the women’s race had a small roster of only three competitors, when world titles are on the line the stakes are still high. Japan’s Mami Tani and Aussie Sally Pilbeam put up a good fight and kept the action close. While Tani exited the waters first, Pilbeam was only a short 33 seconds behind. Keeping the pressure on, Pilbeam kept Tani in her sights. It wasn’t until the end of the bike where Tani really gained some ground to guarantee her the win. Tani had an undefeated 2017 season, meaning ending the year with a world title makes it perfect. Pilbeam then took second place and third went to Patricia Collins (USA).

PT3
The men’s PTS3 race was dominated from start to finish from Spaniard Daniel Molina. He was the best of the day in the swim, bike and run and his early lead was never doubted. He crossed the line with an almost three minute advantage over the rest of the field, increasing his bronze medal from last year to gold and his first world title of his career.
The battle for the silver was a closer one as Germany’s Max Gelhaar was in the second position through the bike. He however was passed on the run by Justin Godfrey of Australia, who then went in to take second place. Gelhaar was left to claim the bronze.

Mimicking a race similar to the men’s Elise Marc of France became the women’s PTS3 World Champion after leading the race from the start line to the finish. Her win was a large improvement from the World Championships held in Rotterdam the year before as she finished fourth. Coming in second place was Anna Plotnikova (RUS) who narrowed down a two-minute deficit down to a minute on the run. Third then went to Maike Hausberger who finished off the podium despite having to serve a ten-second penalty for an irregular transition.

PT2
Great Briatin’s Andrew Lewis culminated his season with a fantastic win in the PT2 class, adding up another gold medal to his tally. He was not the first out of the water, though. USA’s Mark Barr had one of the fastests swim of the morning in the Maas river, but he was quickly caught by Stephane Bahier (FRA), who led on the bike course, but when it all came to the run, the British showed his strength and passed Bahier, Barr and ended up crossing the finish line first, with over a minute difference with Barr, who managed to keep the second place. Coming from behind, Mohammed Lahna, crossed the finish line in third, but after an official protest from the French National Federation, bronze medal was for Stephane Bahier.

On the women’s race, Finland’s Liisa Liljard grabbed her first ever World Title, after beating one of the race favourites, USA’s Allysa Seely, in the PT2 Women’s race. Also dissapointing finish for American Hailey Danz, who finished in fourth place after being beaten by British Fran Brown in the last minute.

PTWC
Both Jetze Plat and Geert Schipper promised in the press conference, the day before the race, that they will be try to get a one-two for the Netherlands on the podium in the PTWC class, and they delivered. Platz, Paralympic gold medallist in Rio 2016 and World champion last year as well, showed that his form is just perfect, and led the race since the first strokes on the Maas river swim. He came out of the water first, and maintained that position for the whole race, to end up crossing the finish line with a 2 minute difference over the next competitor, his team mate Schipper. “It really feels incredible. Last year I managed to win the World Championships here, but this year, being also the WTS Grand Final, is much more special. I knew the course very well. My swim was good, the bike during the first two laps were also quite good but on the third lap it started raining and the course was really slippery. I had to keep my head under control. I knew I had a gap big enough to maintain so I just thought of don’t make any mistakes and finishing”, said Platz after the race. Both Dutch athletes were cheered by the spectators who lined along the course and kept increasing the difference with the rest of the competitors lap by lap. After 40 km on the handbikes and 10k more on the racing wheelchairs, bronze ended up on the hands of British Royal marine Commando Joseph Townsend, who managed to leave Aussie Nick Beveridge behind in the last laps.

In the women’s side, Aussie Emily Tapp was the strongest PTWC female of the morning, and not even the storm that made the course more complicated during the bike section was a problem for her to cross the finish line before all the other competitors, stopping the clock quite impressively on 1h20’28’‘. First one out of the water was British Jade Jones, one of the most experienced swimmers on the field, but she was caught on the third lap of the bike by Tapp, who since then led the race until the last meters. Behind them, an impressive come from behind for Spaniard Eva Maria Moral Pedrero to finish in third position, the second bronze in the World Championships in a row on her paratriathlon career. 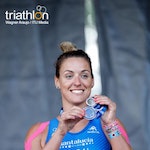 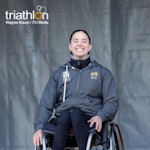 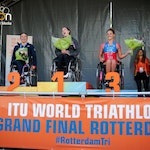 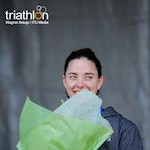 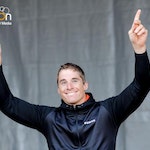 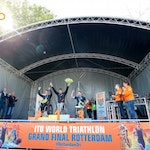 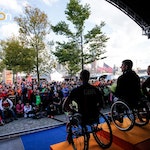 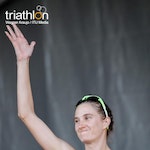 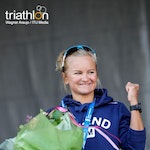 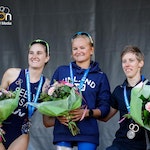 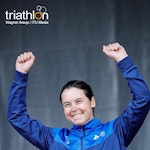 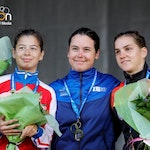