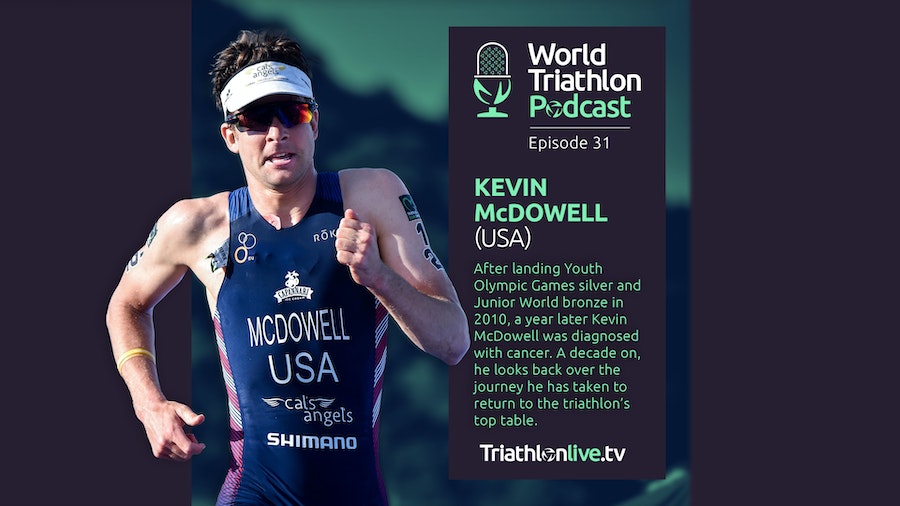 On the latest edition of the World Triathlon podcast, USA’s Kevin McDowell gives an incredibly honest and articulate appraisal of his recovery from the cancer that threatened to derail his career in 2011. From his parents breaking the news to the intense 6 months of treatment and long road back to full fitness, his story reveals a courage and single-mindedness that has helped get him back to the top of the sport and arguably in the shape of his life now 10 years cancer free and as the final leg of the Olympic qualification process draws near.

“Ten years was a pretty special one to hit,” he says. “It’s been quite a rollercoaster since that diagnosis. There’s been some great highs and big lows and everything in between, more than I would have ever imagined, but I feel like I’ve truly come out of it stronger at this point.”

“I mean, when my parents broke the news to me, I was just speechless. The doctor said ‘give me six months of your life’. So I was like, all right, six months, let’s do this. This is my new goal. And actually, I went through it pretty, pretty well. I had a good mindset going through it… and I just honestly thought, ‘Oh, I’m going to go through these intense six months of chemo and I’m going to be fine’.”

“I’d say it wasn’t even until recent years where I fully accepted and realised how much damage I had done to me to going through all those treatments. I mean, I lost a ton of weight, it completely changed my body. everything was out of whack. I mean, I was 18, you’re still growing at that point.”

“So it was like, my body just was totally in a funk. Hormones, everything… I should have let my body truly recover because it was basically just beat up when I finished, I mean, I was frail, hair gone, everything.”

“As athletes we’re so on top of nutrition and sleep and health and so I had all these good habits instilled in me. So I was kind of in a way breezing through more than they thought the first. I mean, I hadn’t lost my hair right away, I go in for a chemo and then I go run eight miles with my teammates… and then that changed, then things caught up to me. Then I lost my hair. Then I got really sick.”

“I definitely tested my mom a lot because she’s a nurse and knew the risk, but she knew how much mentally I needed to still keep some normalcy. So it was a, it was a balance and I definitely pushed it a lot, but it helped me get through it. That was my coping mechanism.”

The result of that mentality and coping mechanism also meant that McDowell returned to racing before his body was ready for the demands of a triathlon season.

“You know, it’s funny because… there were periods of times where I’m like, ‘Oh, I’m back to where I was’. And it was true. I would get back to that level, but it was so short-lived and then my body would like break down. But the issue was, when I was a junior, at that point one of my biggest strengths was my strength. I was super robust, super strong as a whole. And it’s crazy but to date, now, I’m probably back to the muscle weight and everything that I was 10 years ago.”
“I’d say 2019 was like a turning point year for me. I ended up getting an injury and had to take some time away and then build back up and things were actually then progressing really well, but it made me really think do I really want to do this? I want to do this.  I love this, it’s joyous. It’s not a burden for me to go out and do this stuff. And I do want to see I’m not done yet.”

“I want to see what I can actually do because I haven’t reached where I’d always envisioned myself being. I’m excited, I have another spark in me that maybe I was lacking for a little bit on and off through these last years.”

You can listen to Episode 31 of the World Triathlon podcast in full on Apple, Google and Spotify.