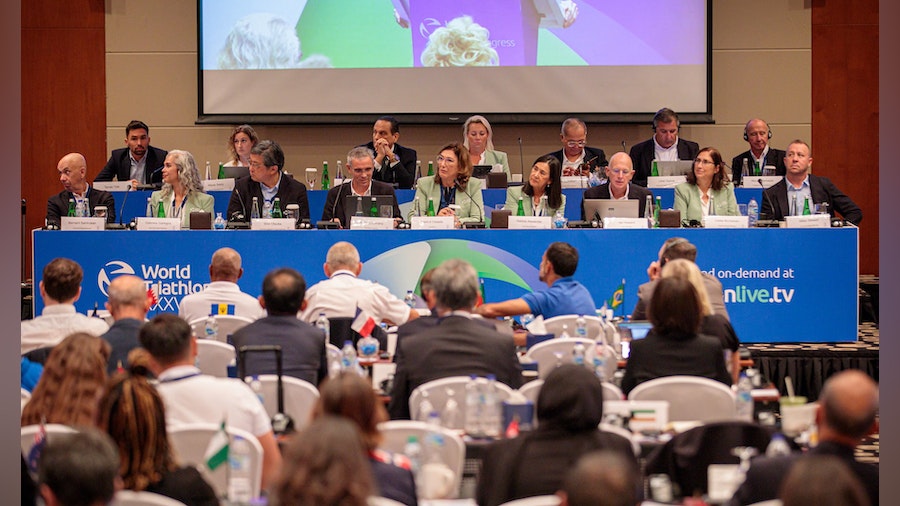 World Triathlon’s member National Federations came together in person for the first time since 2019 on Sunday as the 35th World Triathlon Congress concluded a spectacular 2022 Championship Finals in Abu Dhabi.

As 53 NFs came together in the UAE, 47 more joined online as the hybrid meeting delivered a collective look back over another busy year for the sport, the first of the new Strategic Plan 2022-2025, and reflected on one of the most exciting finals in history.

World Triathlon President and IOC member Marisol Casado opened proceedings and praised the spirit of the membership and the resilience of the sport as it continued to bounce back from the pandemic.

“This was a moment we have all been looking forward to as we brought together our members for another in-depth look across the year, the first of the new Strategic Plan that will shape triathlon up to and beyond Paris 2024,” said the World Triathlon President. “The remarkable racing for the world titles that we were able to witness the last few days in Abu Dhabi crowned an outstanding year on and off the blue carpet and was symbolic of the hard work of our organisation, our members and our stakeholders.”

The Executive Board decided to include an expiration period of two years on the Transgender Policy previously approved and to create a working group that will further study the medical studies to further develop the policy.

The Board approved a Competition Rules update that will be in place from 1 January 2023. Among the rules that will be implemented for the next season are regulations over the use of running shoes, to be adapted to follow the rules implemented by World Athletics. A new maternity policy that will freeze the rankings of athletes from the moment they announce their pregnancy until the child is two years old, to facilitate their return to competition, will also come into effect.

The IOC’s experts on human rights Magali Martowicz and Madeleine Pape delivered a keynote speech to delegates, bringing the benefit of their vast experience on the topic and the subject of transgender athletes in sport to the members.

Development, the roles of the Continental Confederations and financial statements were all discussed in depth, including the approval of the 2023 budget to inject funds where they are most needed, at the end of a year in which the athletes Bonus Pool prize money topped USD1million for the first time.

“After two days of Executive Board meetings, hearing the reports of all of our committees and commissions during Congress and holding in-depth discussions with our membership, the strong health of triathlon has shone through,” added the President. “We end 2022 knowing that we continue to grow, innovate and develop the sport. New host cities and commercial partners continue to come on board, the schedule for 2023 is packed and as we increase the number of Para athletes competing at Paris 2024, we held the first ever World Triathlon Para Mixed Relay to great success.”