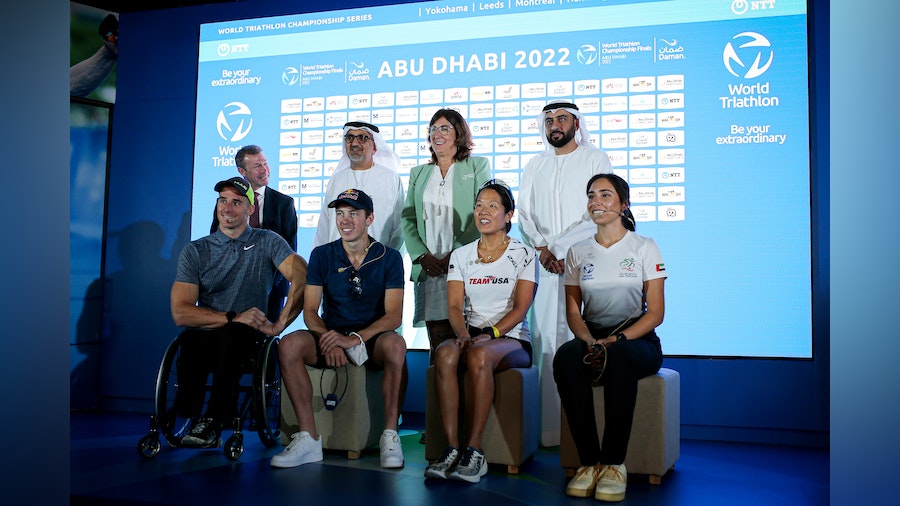 Marisol Casado, World Triathlon President and IOC Member
“This is the crown jewel event. It’s very important for us to open the door to different communities, we’re a very inclusive organisation. We have competitions for everyone, for the best athletes in the world to the people who do it for fun. I’m really happy that we are finally here in Abu Dhabi to stage the Championship Finals here. I have been the President since 2008 and during my mandate, I’ve had the opportunity to introduce Para Triathlon in the Paralympic Games. We have also introduced the Mixed Team Relay in the Olympic Games and now we are working to have the Mixed Relay in the Paralympic Games.”

HE Aref Alawani, General Sec of Abu Dhabi Sports Council
“I think it’s great that more than 100 UAE athletes have qualified for the age-group. We aim to grow this number in years to come.”

Khaled Al Fahim, president of UAE Triathlon
“We are proud to welcome so many age-group athletes from around the world here to race in Abu Dhabi.”

Hayden Wilde, NZL (Elite triathlete)
“I’ve been here for over three weeks, the preparation has gone extremely well. I’ve been doing alot of my preparation at New York University, it’s a beautiful facility. I’ve been really welcomed by the community. I think I’ve had the best preparation leading into a race. I am looking forward to racing.”

Jetze Plat NL (Para Triathlon, PTWC)
“Tomorrow I am going for the sixth world title. A new course, new challenge. looking forward to some good racing. I have done three marathons in preparation so I have been focusing on running. I’m really well prepared. I hope they will close the gap a little bit, we’ll see on the finish line.”

Hana Alnabulsi, UAE (Age- Group, World Triathlete)
“The feeling is so surreal, getting my whole family here, witnessing what I do. I hope I can get my family to join in. It’s a dream come true. I want to represent Olympics, I want to pave a pathway for women to get into the Olympics in the UAE. I have the best support system, they’ve been pushing me since day one.”

Sharon Byun, USA (Age-Group World Triathlete)
We’ve had a wonderful experience everywhere we’ve visited. I’m 53, I did my first Triathlon at the age of 43. I did a local sprint race and became hooked immediately. I’ve been able to compete at the AG world level since 2017. It’s been nice as a woman to remain fit and healthy and show you can still improve as you get older.

Review the event schedule and athlete start lists and follow along as the best triathletes in the world race for personal bests, podiums and world titles.

Watch the race action from Abu Dhabi LIVE and on-demand over on TriathlonLIVE.tv and never miss a moment.