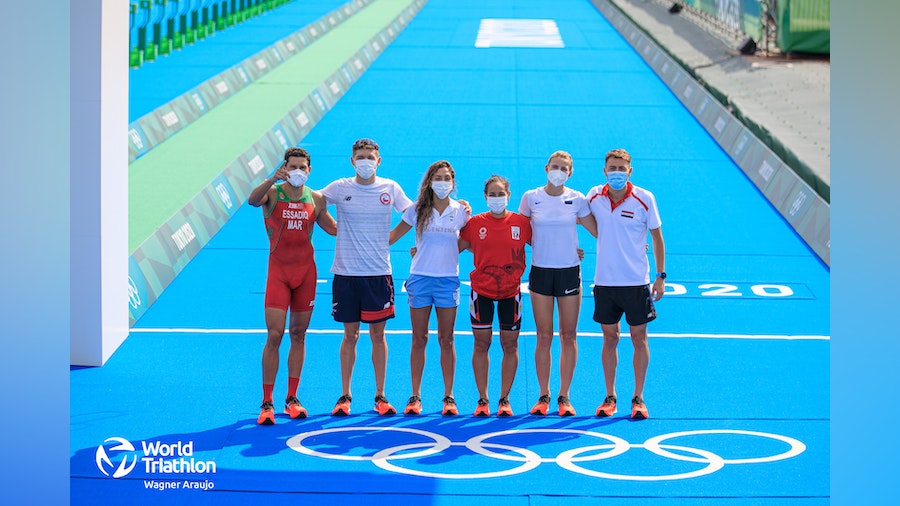 For every athlete who made it to Tokyo 2020, the journey in reaching the biggest start line in the sport was filled with challenges as well as thrills. For those who hail from some of triathlon’s smallest nations, everything is heightened. Just getting to the races, finding the sponsors and seeking out training opportunities is never straightforward.

At Tokyo 2020, three men and three women from the ASICS World Triathlon Team made it to the Olympic start lines: Kaidi Kivioja (EST), Mehdi Essadiq (MAR), Romina Biagioli (ARG), Diego Moya (CHI), Basmla Elsalamoney (EGY) and Mohamad Maso (SYR). Each had their own experience on the day, but all of them used the opportunities presented by being part of triathlon’s global development programme as stepping stones to getting there.

—
For Egypt’s first ever Olympic triathlete Basmla Elsalamoney, the race may not have gone to plan and the learning curve was steep, but it has only left her more determined than ever.

“To be honest, it was very scary for me, I have never witnessed a typhoon before or even been prepared for rainy weather since it rarely rains here in Egypt,” she said. “I set my alarm for 2:30 in the morning, quite early, but I was prepared for that.”

“For the swim I felt great and super comfortable in the warm up, so I had been expecting a better swim. Heading to the first buoy was extremely hard but I managed to keep a good position in a pack, then before the end of the first lap, gradually I started to lose contact with the feet of the swimmers in front of me, so ended up swimming almost solo.”

“Although the result is not what I was looking for, I have got a lot of positive things to keep in mind and a lot of lessons learned to work on later. It was a privilege representing my country at the highest level in the Olympics for the first time in history of Egyptian Triathlon.”

“Actually it is my first ever Olympic Games, and I think it wouldn’t have happened without the team. I am truly blessed to be a part of the World Triathlon Development Team, and I would like to express my gratitude for all of their efforts and support.”

—
Chile’s Diego Moya used the confidence in his swimming to set an important goal in the water and had the mindset tuned firmly to enjoying the experience of racing on such a stage without too much pressure on his shoulders.

“I am really grateful for all the experience of the Olympics,” he said. “I didn’t go with many expectations, I just wanted to learn and have fun. It was amazing to see the other athletes, not just the triathlon but also all the other sports. Everyone happy and enjoying the Games like me.”

“I didn’t have any pressure before the race… my feelings were just happiness and being grateful to be there in my first Olympic Games. Before the race I talked to my coach and said to her that I will be the first one on the first buoy! And I did it!! I knew that I couldn’t fight in the run yet so in my preparation I focused on the swim and bike and I am really happy for my swim.”

—
For Estonian Kaidi Kivioja, a second Olympic experience didn’t play out as she dreamed it might, but her honest reflection is part of what drives her to setting new targets across the next three years towards Paris 2024.

“On the race morning when we saw the conditions, there was really not much to think about,” she admits. “You just had to deal with it and adapt. I went out for my morning shakeout run at 3am and it was pouring so I just ran in the basement of the Olympic Village building. You could actually do a decent loop there because it connected two buildings. At that point I decided I wasn’t even going to take my ice vest with me to the venue… waiting in the line up when we all saw each other freezing I think we were all thinking ‘‘Who could have imagined these conditions?!’’

“The gun went off. I had a decent start and I was in the group surrounded by many. In the far end and coming back I actually remember thinking ‘‘Ok, Kaidi, you’ve got this, you are in a group, you’re swimming in feet’‘. Once we got to the 2 last buoys of the first lap the pace went up and I just couldn’t go with that acceleration. Once that gap forms it grows very fast.”

“As I started riding I felt very weak and I didn’t have my normal strength on the bike either… Honestly there’s not much positive to take from the race itself since nothing went to plan, only that I can be proud of my journey there, for showing up every day and giving my best. It’s obvious that if I want to qualify for Paris I need to work on my swim but I still need more time to figure out what’s the best way to approach this. I’m very grateful for the Asics world triathlon team for their support, help and belief in me over all these years. All the athletes in the team have different struggles they’ve had to overcome to make it that far and that’s so inspiring. It’s a big honour to belong to that team!”

—
Mohamad Maso received the IOC Tripartite invitation to reach his first Olympic Games and used the experience to its fullest, including the huge media attention surrounding he and his brother’s appearance as two of only six Syrians at Tokyo 2020 and having left the country with little more than his tri suit and trainers in 2015.

“It was an amazing experience to be part of the history - I still cannot believe it sometimes because I just started to train as a professional athlete three years ago,” says the 28-year-old. “I always struggled with getting visas for each International race and sometimes I’d get refused, so it’s been a bumpy ride with a lot of stress! But happy I have made it.

“I appreciate a lot what the Olympic community and the country of Japan did in their effort to make this happen and making us enjoying the moment.”

“Lining up with the best athletes in the world was of course an honour and a dream, because looking back 10 years to when I started doing triathlon in Aleppo, I was watching most of those athletes only on the TV and suddenly I was racing with them!”

—
Mehdi Essadiq became Morocco’s first Olympic triathlete and the third and final attempt and was a flag bearer representing Africa at the Opening Ceremony. Knowing it was his last shot at the Games heightened the tension before, but also the experience throughout his Tokyo 2020 adventure.

“It was an incredible experience full of emotions from day one in Tokyo,” he recalls. “I had the most beautiful surprise when my NOC announced that I had been chosen to hold the Olympic flag during the opening ceremony. I was so humbled and honoured after all these years struggling between my medical career and triathlon, especially this last year during the pandemic. I felt blessed and grateful.”

“I started with World Triathlon in 2008, and at this time there was no proper federation in my country and I was racing under the ITU flag. More than a sports adventure that helped me to perform as an athlete at the high level, it was a very beautiful human experience that allowed to meet incredible athletes and travel all around the world. I will be forever thankful and I hope that this participation will help triathlon to grow in my country.”

“I knew my family and friends were watching even if they weren’t there. I had a thought for my wife who has made a lot of sacrifices to see me become an Olympian. She deserved as much as me that beautiful end with the Olympic Games. I was thinking of my parents and hoping they enjoyed the race and the journey as much as me. I knew that the more important for them was to see me cross this finish line and return home safe. I was thinking also to all those people who helped me during the process…I felt blessed to achieve this dream.”

—
If reaching the Games felt like a huge achievement, the complications brought by both the pandemic and injury to the lead-in for Argentina’s sole Tokyo 2020 triathlete Romina Biagioli made the process even more of an uphill battle.

“I can say my dream came true as I always wanted to be in Olympic Games,” she says, but adds; “I didn’t enjoy it as I had dreamed because I feel it was a strange situation not only in the event but all the qualification process. I had the accident breaking my ribs in one of the races when I was looking for points so it was really hard for me knowing that even if I qualified, the preparation for Tokyo would be not as I wanted. I just had to do what the injury let me do day by day.”

The Village was amazing, I had the opportunity of visiting the one at London 2012 when I went to see my sister but now I was one of the athletes competing and that felt different and I’m so proud of that - we have had just one female athlete in the history of Olympic triathlon representing Argentina, in 2004. That’s why I’ll do my best to motivate more girls in my country and in South America.”

“I’m very thankful for the ASICS team and I think many races during the first period would have been impossible without this support. I made my first Top 10 in a World Cup being part of this team and that will always be something I’ll be thankful for.”