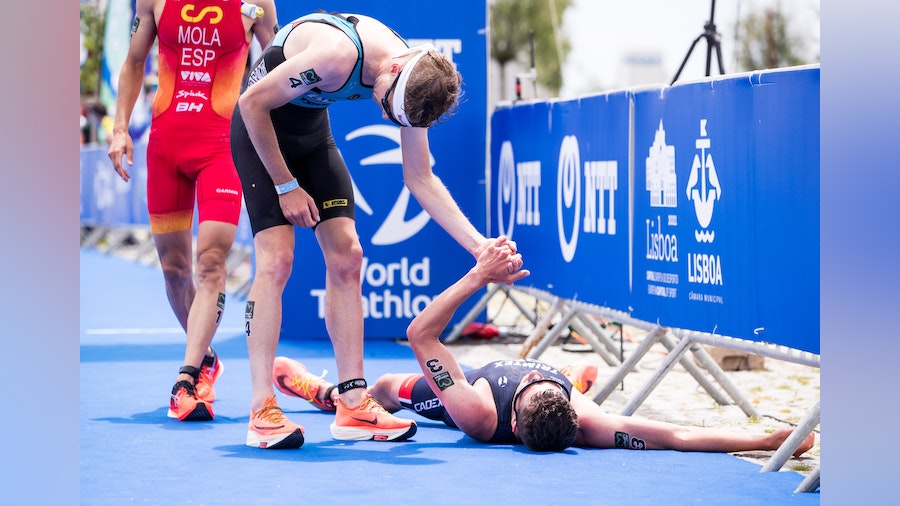 New venues, new faces, some legendary courses and crucial Olympic Qualification points were the flavour of the first World Triathlon Cups of 2021, where it was the Portuguese capital Lisbon, Arzachena on the Italian island of Sardinia and Huatulco, Mexico, helping bring the action to a simmer ahead of Tokyo 2020.

The now-familiar test of Karlovy Vary kicked off the second half of the season in the Czech hills, before the season was wrapped up with a South Korean double header, where Haeundae joined the long-running Tongyeong as a World Triathlon host city for the first time.

You can watch all the races back on the TriathlonLive.tv 2021 World Cup Playlist.

—
World Triathlon Cup Lisbon
It was a fruitful weekend for Switzerland’s two-time Olympic medallist Nicola Spirig, who took the women’s gold in Lisbon just a day after securing the Swiss team a place on the Tokyo 2020 Mixed Relay start list with bronze in the qualifier event.

Behind her, Ireland’s Carolyn Hayes was in fine form as she hit the second World Cup podium of her career, while USA’s Kirsten Kasper claimed the bronze to get back among the podium positions after a difficult two years dogged by injury.

In the men’s race, Kristian Blummenfelt continued his golden start to the season, another powerful run performance helping him come out on top of a strong field on a blowy Olympic-distance course.

Max Studer (SUI) had been the only man able to stay anywhere close to the Norwegian after he had cranked up the pace from the halfway mark, but there was yet another gear to come from Blummenfelt as he pulled away to take the tape, Studer and Spain’s Genis Grau joining him on the first World Cup podium of 2021.

—
World Triathlon Cup Arzachena
Stacked line-ups returned to the Italian island of Sardinia and the notorious challenge of a stunning Arzachena sprint-distance course. After hoovering up the tough 1.5km climb at the heart of each of the three bike laps, it was Jonathan Brownlee delivering the finish-line roar, taking the tape to set himself on the trail to Tokyo with the wind firmly in his sails.

It was a strong last-ditch effort from the Brit that managed to shake off the attentions of Swiss Adrien Briffod before the long final turn onto the blue carpet, while just a few seconds back Spain’s Mario Mola was looking dangerous as he eased his way into third only to run out of course in his challenge for silver and gold.

In the women’s race, it was to be Marlene Gomez-Islinger’s day, the young German timing her final-lap push perfectly on the 5km run to narrowly - and delightedly - earn a memorable first World Triathlon Cup gold.

There was significant ground to make up on the excellent Julie Derron after the Swiss had flown out of T2, but that was exactly what Gomez-Islinger did, picking through the field and passing Derron as they approached the finish chute to take the tape for the first time in her career, Verena Steinhauser (ITA) picking up a second successive bronze on the island.

The field was strong but the Canadian’s game plan was clear, leading for almost the entirety of the sprint-distance course and stretching out a commanding lead over the final stages of the 5km run. The young duo of Miguel Hidalgo and Manoel Messias picked up the silver and bronze on a fine day for Brazilian triathlon in Mexico.

In the women’s race, a debut World Triathlon Cup win for Alberte Kjær Pedersen lit up the beach town on the Saturday evening after the rising Danish talent delivered a sizzling 5km run to take the tape.

It had been a mighty effort on the bike but there was plenty of power left in the legs to ensure a first World Cup win, USA’s Kirsten Kasper coming out on top of an intense battle for silver with Lisa Perterer after it looked for a time like the Austrian was coasting to silver.

—
World Triathlon Cup Karlovy Vary
Germany’s Lasse Nygaard-Priester was able to lift the mist that had hung over Karlovy Vary on a mid-September Sunday morning, lighting up the beautiful Czech town with an incredible first run lap that opened the window he needed to ensure his first World Triathlon Cup medal was golden.

The German managed to pull clear of Britain’s Grant Sheldon after the pair had powered through the first of four 2.5km laps on the demanding Olympic-distance course to take the lead, Hungary’s Csongor Lehmann securing a brilliant first World Cup podium to follow his U23 World title in style.

Switzerland’s Julie Derron then made light work of the mighty Czech challenge, making up lost ground in the swim with a powerful 40km ride to help bridge the chasers to the front before a relentless 10km run to the line secured her the gold.

At the bell, it was Japan’s Ai Ueda picking off athletes ahead and gradually chased down the Italian Bianca Seregni over the final lap but Derron was to prove untouchable, beaming down the blue carpet to the roar of the crowds that erupted once again for the smiling Ueda and again in appreciation of Seregni’s incredible bronze on World Triathlon Cup debut.

—
World Triathlon Cup Haundae
Back-to-back races in South Korea rounded off 2021’s World Cup calendar, the first on a brand new sprint-distance coastal course in Haeundae. Great Britain’s Beth Potter had chosen Asia as the location to wrap up her rollercoaster year and she started the tour in style with a good swim and bike breakaway before running her way to gold.

It had been teammate Kate Waugh with her all the way over the 20km ride who then hung on for a career-best silver and a first World Triathlon Cup podium. Hungary’s Zsanett Bragmayer had a fine showing too, only fading in the closing stages but managing to scoop an excellent bronze.

In the men’s race, Frenchman Anthony Pujades came out on top of the 46-strong field after a front bike group of 10 had managed to carve a minute over the chasers, going on to run his way to the top spot after a gripping 5km foot race.

Pujades really started to motor at the halfway mark, Japan’s Takumi Hojo going all in to try and hold on to his heels but the effort ultimately proving too much as he landed a hard-earned silver. Nicola Azzano out-sprinted fellow Italian Alessio Crociani to take the bronze.

—
World Triathlon Cup Tongyeong
Another classic edition of the longstanding Tongyeong World Cup closed out the 2021 second-tier season and there was a familiar air to the way the race played out as Great Britain’s Beth Potter showed her raw potential and run power for the second gold medal in successive weeks.

It was a two-person break this time around on the bike, though, and once again it was fellow Brit Kate Waugh sharing the pulls and helping do the damage on the rest of the field’s chances. The gap behind was even larger this time, though, Sandra Dodet producing the fastest run split to pick up an excellent bronze.

There was a new face atop the men’s podium as Morocco’s Jawad Abdelmoula showed great versatility beyond his more familiar athletics track to follow in Potter’s footsteps to the gold in Tongyeong. Thirty seconds off the front out of the water, he was able to bike his way into contention over the 20km and had enough left in the tank to produce a sub-15minute 5km and take the tape.

Italy’s Alessio Crociani made up for the disappointment of fourth place in Haeundae with a sterling silver performance, Spaniard Sergio Baxter Cabrera landing his first World Cup medal in third place to complete the new-look podium and ensure all eyes will be on the breakthrough stars ready to show their potential in 2022.