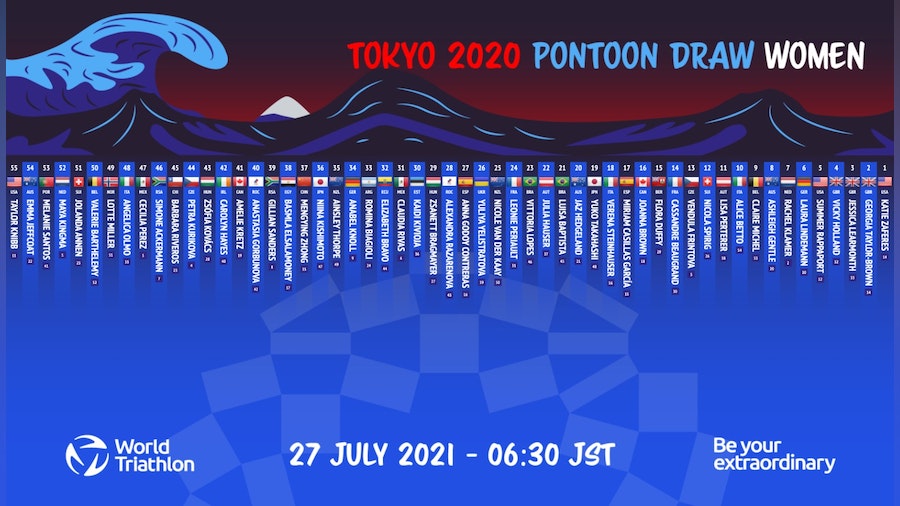 Sunday morning local time, two days ahead of the Women’s Olympic Triathlon (Tuesday 06:30am local time), the draw was made for the athletes’ pontoon positions on the start line. As with the men’s draw 24 hours earlier, the possibility of choosing the straightest line to the first buoy, or starting alongside some of the strongest swimmers in the field, was the first strategic moment ahead of the races. And just as with the men’s draw, there were plenty of early talking points.

Olympic Triathlon pontoon positions are chosen in order of the athletes’ Olympic ranking, the first ten choosing their position anonymously, the rest of the field’s slots being updated live for the briefing room to see. Once all the remaining athletes had chosen their start slot, the first ten were then revealed.

USA’s Taylor Knibb was the first to break rank and opt for the position nearest to the transition. She will be joined by some equally powerful swimmers, including Maya Kingma (NED) and Valerie Barthelemy (BEL). Vittoria Lopes (BRA) and Cassandre Beaugrand (FRA) are usually two of the strongest in the water who will be starting towards the middle of the line, Flora Duffy (BER) and Nicola Spirig (SUI) in positions 15 and 12 respectively.

For information on how to watch the race, click here.