Devonport, Australia, will raise the curtain on the 2020 World Paratriathlon Series (WPS), after successfully delivering the ITU Paratriathlon World Cup over the past three years.

On Saturday 29th February fields of paratriathletes, at the 2020 Devonport ITU World Paratriathlon Series, will continue their campaigns for selection heading into a Paralympic year and aim for WPS success.

The coastal course, in the north of Tasmania, soaks up a 750m swim beside the Mersey Bluff Lighthouse before a six-lap bike and two-lap run. All paratriathletes will be eager to get their Paralympic season off to a strong start with the action from in and around streaming live on TriathlonLIVE.tv. Stacked start lists, across all paratriathlon events, will determine that racing will be competitive and packed with drama!

Carlos Rafael Viana from Brazil and Paralympian Alisa Kolpakchy from Ukraine, both earned gold medals in the 2019 Funchal ITU Paratriathlon World Cup, will lead in as favourites in the PTS5 category, in their respective races. Australia’s David Bryant and Russia’s Alexandr Ialchik will also be among the favourites in the men’s race.

In the visually impaired races, Australia’s Paralympic champion Katie Kelly (PTVI women), 2016 Rio Paralympic Games gold medallist and Jonathan Goerlach (PTVI men), who claimed the bronze medal in the 2019 Tokyo ITU Paratriathlon World Cup, are marked as home crowd favourites and will be in hot pursuit for podium success. Both Kelly and Goerlach claimed the gold medals in the recent Newcastle OTU Paratriathlon Oceania Championships, in January this year, in this category.

The Russian duo of Victor Chebotarev and Anna Plotnikova are in pole position in the PTS3 category, while Japan’s Hideki Uda, who earned the bronze medal in the 2019 Banyoles ITU Paratriathlon World Cup and fourth place in the 2019 ITU World Triathlon Grand Final Lausanne and Luxembourg’s Joe Kurt remain favourites in the competitive PTS4 men’s classification. Sally Pilbeam (AUS) will be aiming to apply the pressure in the women’s race.

USA’s Melissa Stockwell, who claimed three Paratriathlon World Cup golds in 2019 and Frenchman Jules Ribstein, who had brilliant run in 2019 that began with victory in WPS Milan and ended with the World and European titles, will be the ones to beat in the PTS2 women’s and men’s races.

The PTWC races will be headlined with the talent of 2019 ITU World Paratriathlon Champion Lauren Parker from Australia and fellow compatriot Nic Beveridge, bronze medallist in the 2019 Banyoles ITU Paratriathlon World Cup, both will be in pursuit of podium success buoyed by home crowd support. Parker is showing no signs of backing down from her untouchable 2019 world-title win and will be targeting WPS podium success. With the female PTWC class making its Paralympic debut in Tokyo, reigning PTWC World Champion Parker has her sights set on paratriathlon’s biggest stage as she heads into the 2020 season.

Paratriathlon racing in Devonport commences at 15:00 (local time, AEDT) on Sat 29 Feb and streaming on TriathlonLIVE.tv 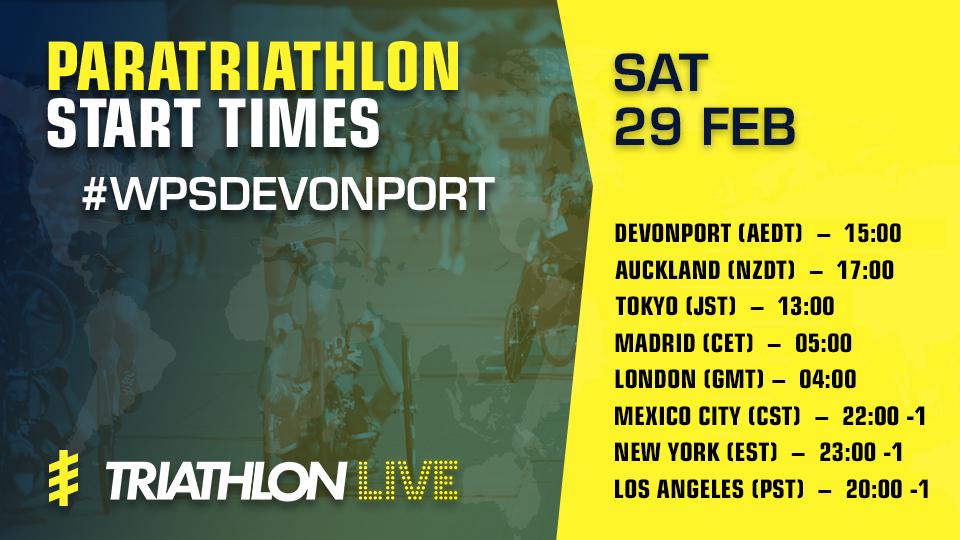 With the paratriathlon events of the Tokyo 2020 Paralympic Games taking place across two days at the end of August, 2020 looks set to be another unmissable season. Follow all the action on TriathlonLIVE.tv